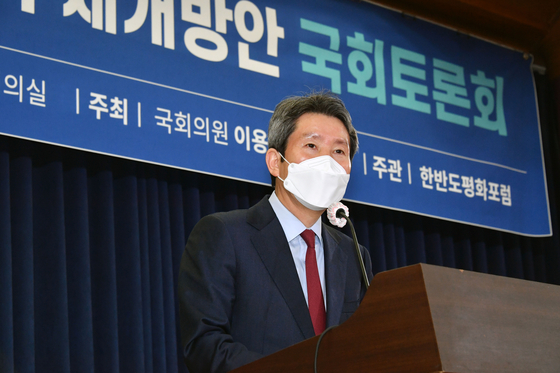 Unification Minister Lee In-young delivers an address at a forum on inter-Korean ties held at the National Assembly in western Seoul on Monday. [YONHAP]


South Korea's top inter-Korean official Monday called for communications to be restored between the two Koreas, saying Seoul must move on from the North's demolition of its liaison office in Kaesong in June.

In a forum held at the National Assembly, Minister of Unification Lee In-young called Pyongyang's decision to destroy the two sides' sole fixed communication office without warning an "unconditionally unacceptable act" that appeared to signal the collapse of relations between the two Koreas.

"Such action by the North was highly mistaken and betrayed the hopes and desires of our people yearning for peace," Lee said.

The destruction of the liaison office, established in September 2018 as a result of a series of inter-Korean summits that year, sent shockwaves across South Korea in June.

While Pyongyang had ratcheted up tensions over its objections to South Korean activists sending propaganda leaflets across the border, the move was wholly unexpected in Seoul, which for months had been blamed by North Korean propaganda for the failure of its denuclearization talks with the United States.

With hopes that a more seasoned political figure could turn the situation around, the Moon Jae-in administration brought in Lee, a four-term lawmaker and former floor leader of the ruling Democratic Party, as Kim's successor.

Not unlike his predecessors, Lee's proposal to reverse the downward spiral in relations is to let bygones be bygones.

"It may not be easy, but we cannot leave the collapsed liaison office as a history of animosity, but we must rebuild it toward the achievement of greater peace," Lee said Monday. 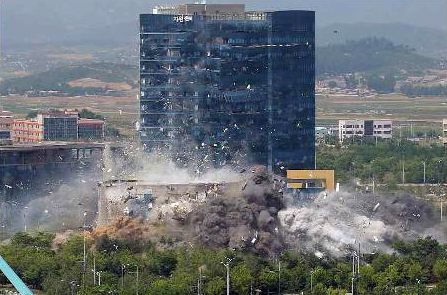 
The minister went even further to propose establishing even more offices for liaison and trade purposes in key regions across the peninsula, including the capitals of Seoul and Pyongyang, as well as the North Korean cities of Kaesong, Sinuiju and Rajin-Sonbong.

The idea of setting up a liaison office in Pyongyang, where it could act as the South's de facto embassy, has long been suggested by officials and experts in Seoul. But even in the best of times for inter-Korean dialogue, the North found the suggestion unpalatable.

That hasn't stopped Lee from pushing the idea publicly. Before his confirmation as minister in July, Lee had floated the idea of asking the North for land in Pyongyang to set up an inter-Korean liaison office in compensation for the approximately 10.2 billion won ($9.2 million) lost by Seoul with the demolition of the Kaesong office.

North Korea has made no response to any of these overtures, and has generally gone silent toward the external world as it struggles to cope with its economic malaise amid the Covid-19 pandemic.

With the regime in lockdown over fears the contagion could overwhelm its inadequate health care system, Lee last week proposed Seoul share some of the Covid-19 vaccines it expects to receive from foreign drug makers in the coming months.

"If South and North can cooperate with each other in terms of a treatment and vaccines, we could create an opportunity to relieve North Korea of some of its economic difficulties brought on by its antiviral response," Lee said on a local news broadcast in Seoul last Wednesday.

Through various propaganda pieces, the regime has ostensibly made clear it will not take any outside help with regard to the pandemic, noting in a Rodong Sinmun editorial Sunday it would keep its border shut "like iron."

Seoul's Unification Ministry said Monday there were no signs of North Korea easing exchanges on its border with China, nor any hints that humanitarian aid sent by private groups in South Korea and abroad made its way into the country.