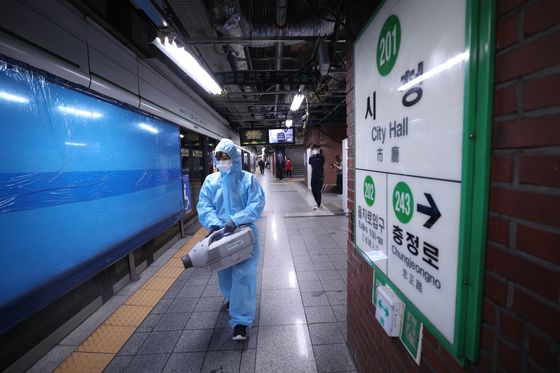 City Hall Station of lines No. 1 and 2 in Jung District, central Seoul, is disinfected Wednesday after Seoul Metro announced three Covid-19 cases among its workers there this week. [NEWS1]

New, imported cases so far seem to be getting detected early by Korea’s Covid-19 quarantine system, which requires visitors to self-quarantine for 14 days, the incubation period of the virus.

But health officials said they were keeping an eye on the dangerous trend, noting that daily imported cases were reaching two-digit figures lately, nearly double the number recorded in April and May.

Among 43 people in Korea who were diagnosed with Covid-19 on Tuesday, 12 were infected abroad, officials from the Korea Centers for Disease Control and Prevention (KCDC) said Wednesday. Four were from the Americas, three from Pakistan, two from the Philippines and one each from India, Japan and Kazakhstan.

Imported cases hovered around 12 and 13 on several days this month.

“We’re seeing many more cases from the southwestern part of Asia and the Middle East,” Yoon Tae-ho, an official on the Korean government’s Covid-19 command center, said in a press briefing Wednesday. “Those from Pakistan and India are especially on the rise.”

Korea had counted 1,371 imported cases as of Tuesday at midnight, about 11.2 percent of the nation’s total case load of 12,198. About 41.6 percent were from the Americas, followed by Europe at 35.2 percent, Asian countries other than China at 20.7 percent, China at 1.4 percent, Africa at 1 percent and Australia at 0.1 percent, according to KCDC data. 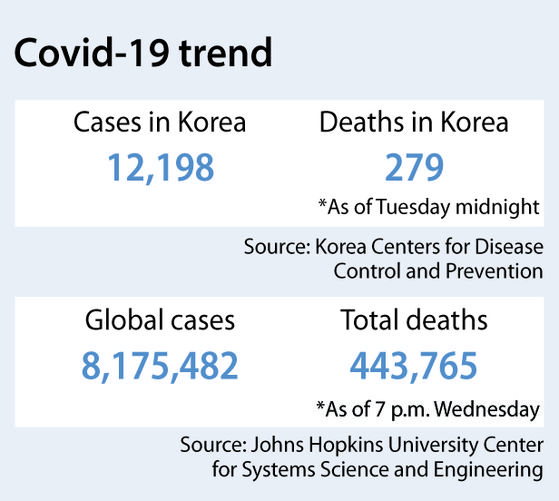 Korean health authorities Wednesday also cautioned the older population about getting sick, saying they were witnessing several cases where people above the age of 60 were getting diagnosed with Covid-19 late into their infections — and sometimes too late for any medical treatment to help them survive.

Such was the case with an 80-year-old man who died in Incheon earlier this week after getting infected at the health care company Richway in Gwanak District, southern Seoul, to which at least 176 Covid-19 cases have been traced.

Officials said the man visited Richway on May 30 and tested negative on a coronavirus test he took during his two-week self-quarantine. He didn’t feel any symptoms of the virus, but on June 11, as he took another Covid-19 test to be freed from quarantine, his results turned out positive. He was hospitalized on June 12 and started to receive treatment, but doctors said his lungs had already been severely damaged.

As of Tuesday at midnight, 279 people had died, up by one from the previous day, while 10,774 people had been declared fully recovered, up by 14 from the day before.

Apart from the 12 imported cases Tuesday, there were 31 domestic cases, which predominantly came from the Seoul metropolitan area, as several clusters continue to grow: 12 were from Seoul, 11 from Gyeonggi and two from Incheon.

Five cases were detected in Daejeon and one from South Chungcheong.

The Seoul Metro announced Wednesday that three of its agents who work at City Hall Station of Seoul subway lines No. 1 and 2 in Jung District, central Seoul, tested positive for the coronavirus this week. How they got infected is yet unknown. One man was diagnosed Monday and two of his colleagues were diagnosed Wednesday.

That time of year