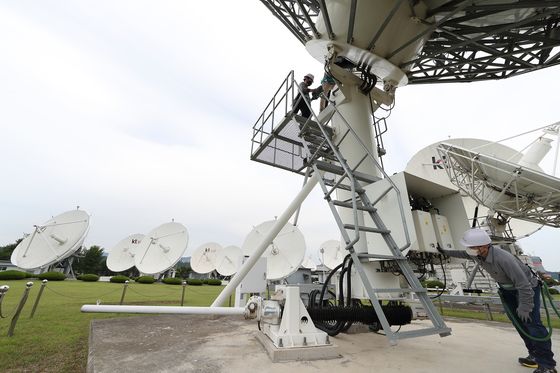 
GEUMSAN, South Chungcheong — KT Sat, a wholly-owned subsidiary of KT, plans to launch its next satellite in 2024, the geostationary bird equipped with advanced technologies for better communications.

Mugunghwa-6A will replace the previous satellite, Mugunghwa-6, which will be decommissioned in 2025 after 15 years of service.

The new communications satellite will be capable of delivering high-speed data with a High Throughput Satellite technology as it orbits at 116 degrees east. The lifetime of the new satellite will be the same as the older version at 15 years, according to a spokesperson at KT.

The technique will make use of multiple "spot beams" to cover a desired service area, rather than wide beams, to bring more concentrated connectivity. KT Sat may also deploy a technology designed to adjust the coverage of beams after the launch so that it can be more flexible depending on client demand.

“The Mugunghwa-6A could serve as a backup communication system in times of natural disaster,” said Song Kyung-min, President and CEO at KT Sat.

He went on to note that the 5G satellite communications market is expected to grow fast in foreign markets, where coverage is spottier.

Marking the 50th anniversary of a satellite service center in Geumsan, KT Sat also vowed to reorient its focus to boost its presence overseas. Global sales are now 12 percent of total, or 19 billion won ($15.7 million), according to Song, but the company aims to increase the portion to 30 percent by 2025.

Target markets include Indonesia and the Philippines, both island countries.

Another area of focus is its shift towards becoming an integrated platform service provider instead of simply offering separate communications services. KT Sat will begin by rolling out a package of maritime connectivity services in the first half of next year for internet connection, the operation of internal closed-circuit televisions and the recording of the entrance and departure of vessels.

“The new service will enable clients to run and manage automated business applications without the need to build and maintain the infrastructure,” the CEO said. “Now, we have those services in a fragmented way, but with the new platform, it will enhance convenience and reduce financial burden for our customers.”

The interoperability of the commercial 5G network and satellite communications is still being developed. KT Sat has established a test bed to experiment the interoperability and will carry out a joint research project with the European Union this year.