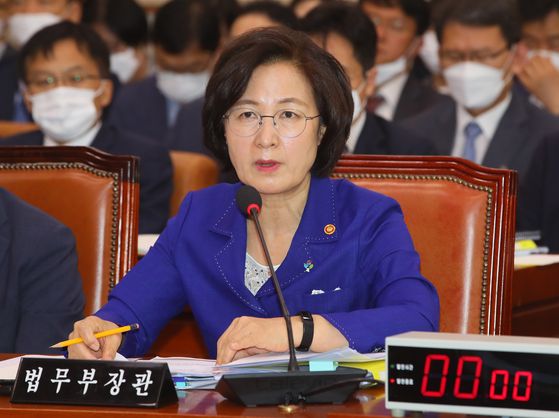 Justice Minister Choo Mi-ae speaks at the Legislation and Judiciary Committee of the National Assembly on Thursday. [YONHAP]

Justice Minister Choo Mi-ae on Thursday called out Prosecutor General Yoon Seok-youl’s decision to reassign an internal investigation into the prosecutors’ handling of a 2010 corruption probe into a former prime minister, removing jurisdiction from the independent office originally assigned to the case. 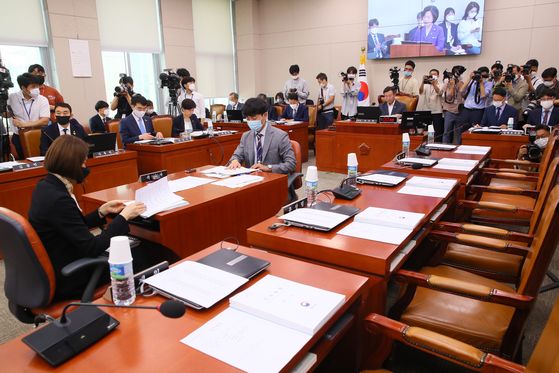 Lawmakers of the main opposition United Future Party (UFP) boycott the Legislation and Judiciary Committee meeting on Thursday to protest the National Assembly speaker and the ruling Democratic Party's operation of the legislature. [YONHAP]

Choo was referring to an internal investigation into allegations that former Prime Minister Han Myeong-sook’s 2015 conviction of taking illegal political donations from a businessman was based on fabricated testimony. Han, who served as prime minister from April 2006 through March 2007 in the Roh Moo-hyun administration, was convicted in 2015 of illegally receiving political donations in 2007 from Han Man-ho, a businessman, and served a two-year prison term. She was released in 2017.

Han Man-ho, who died in 2018, had written in a memoir that prosecutors forced him to change his testimony. He wrote that he was coerced to say he had given money to the former prime minister, although he actually gave money to a ruling party lawmaker.

A prison mate of the late businessman filed a petition to the government in April to investigate the suspected coercion by prosecutors. The Justice Ministry opened a case based on the petition, and assigned it to Prosecutor General Yoon and the Inspection Headquarters of the Supreme Prosecutors’ Office in May.

The prosecutors who had worked on the 2010 probe are now senior members of the high prosecution, and Inspection Division III of the Inspection Headquarters is in charge of probes into high-ranking prosecutors.

The Supreme Prosecutors’ Office said that even if the accusations can be verified, the statute of limitations for the prosecutors has already expired, so the case cannot be the subject of an internal investigation. It also said the petitioner had wanted the Seoul Central District to investigate the case.

Unlike the independent inspection division, the human rights office lacks the power to request warrants, conduct raids or detain suspects. It also must report its findings up the chain of command and request permission to file charges if it finds sufficient evidence that a crime took place.

Prosecutor General Yoon recently ordered the creation of a special team of three prosecutors, which began looking into records of the 2010 investigation on June 10.

Speaking to the Legislation and Judiciary Committee on Thursday, Choo criticized Yoon for attempting to bypass the Inspection Headquarters of the Supreme Prosecutors’ Office because its chief is an outside expert.

“This should never become a common practice,” she said. “I will make this right.”

Han Dong-soo, a former judge and lawyer, has headed the Inspection Headquarters of the Supreme Prosecutors’ Office since October 2019. He was appointed to the post by Choo’s predecessor, Cho Kuk, who briefly headed the ministry from Sept. 9 through Oct. 14, 2019.

Han strongly protested Yoon's decision to reassign the case to the Seoul Central District Prosecutors’ Office. In a Facebook message posted on Saturday, he claimed that he has jurisdiction to investigate the prosecutors’ suspected witness coercion in 2010, and that an independent investigation is unavoidable because the public attention is high.

“The Inspection Headquarters of the Supreme Prosecutors’ Office has investigative powers,” he wrote. “If we find a criminal charge during an internal investigation into a member of the prosecution, we can formally open a criminal probe, seek warrants and file an indictment.”

Although Choo and the DP said Yoon was trying to undermine the internal inspection system of the prosecution, the opposition parties questioned political neutrality of Inspection Headquarters Chief Han.

“The human rights monitoring office is conducting an internal probe, but Han, who is not the office’s upper chain of command, made public a pressuring message, demanding a thorough fact-finding probe,” said UFP Rep. Yoo Sang-bum, a former senior prosecutor. “This is a political act prohibited for a public servant.”

The Supreme Public Prosecutors’ Office maintains that it is handling the case according to principles. It said an internal investigation cannot take place for a case where the statute of limitations is expired.