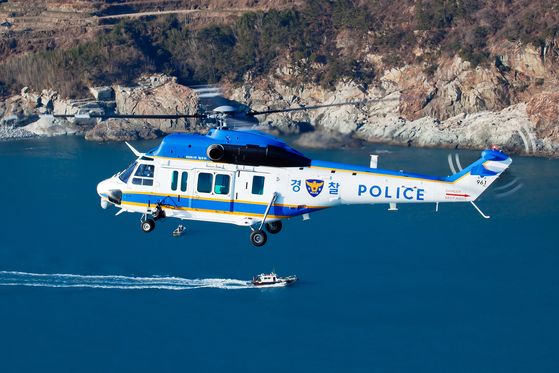 A KUH-1P police helicopter from Korea Aerospace Industries (KAI) flies across the South Sea and Samcheonpo Port on June 17. [KAI]

To demonstrate just how good a product Korea Aerospace Industries (KAI) makes, pilot Kim Chan-dong took his hands off the controls of the updated KUH-1P police helicopter during a demonstration flight over the South East for journalists and foreign dignitaries.


“The helicopter is able to fly itself,” he remarked, showing off the automatic control system.

The updated aircraft is fitted with two additional fuel tanks, enabling it to stay in the air twice as long as the previous version. The dashboard has been digitized and an air conditioner added to the newer version. Up to a total of 14 people including pilots can be carried on a KUH-1P, which can reach an altitude of 2,700 meters (8,858 feet).

The Wednesday event was part of a friendship diplomacy program KAI hosted with the goal of marketing its aircrafts and helicopters to foreign countries. As part of the program, KAI signed a memorandum of understanding with the Human Resources Development Service of Korea and the government of South Gyeongsang on Wednesday to support an employment permit system that helps foreign labor receive treatment equal to domestic workers.

The signing ceremony was attended by officials from 16 countries, including Indonesia, Thailand, the Philippines and Vietnam.

KAI, the sole aircraft manufacturer in the country, makes the FA-50 light combat aircraft, the T-50 advanced jet trainer and the KUH-1P. The updated KUH-1P was introduced in February.

The company exports to 7 countries, including Turkey, Iraq, Thailand and Senegal, but no overseas sales yet involve helicopters. During the Wednesday event, some countries expressed interest, but in buying the KT-1 basic trainer instead of helicopters. 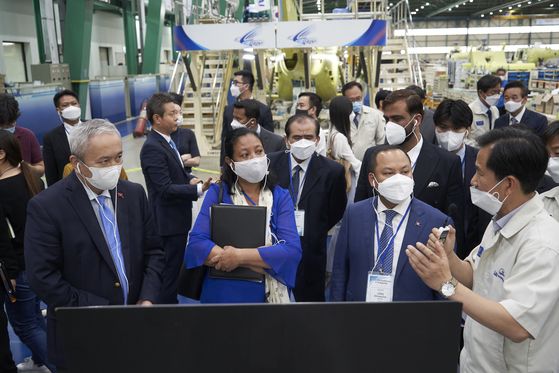 Foreign officials from 16 countries hear about aircraft from Korea Aerospace Industries (KAI) at an assembly line of the company's headquarters in Sacheon, South Gyeongsang, on June 17. [KAI]


“We have already been in touch with KAI [to discuss the purchase of] KT-1,” Abida Islam, the ambassador of Bangladesh told Korea JoongAng Daily on June 17. She wasn't sure about the purchase of helicopters yet, but said that she could “recommend to the government” after being introduced to the helicopters because KAI has “quality products” and she has “full confidence” in the company.

The ambassador declined to provide the exact number of KT-1s the country is considering, but said it will “depend on the price.” The deal is scheduled to be finalized in August, when a delegation visits Korea.

Christian L. De Jesus, the Philippines’ chargé d’affaires, refused to deliver his thoughts on additional imports from KAI, but the company is currently in talks with the Philippines over the purchase of KT-1, according to Kim Sang-eung from KAI’s marketing department.

Indonesia, Malaysia, Peru and Columbia are some other countries that are interested in KAI products, according to company adviser Lee Bong-keun.

“Export strategies before and following the coronavirus will vary largely,” said Lee. “From now on, exports should be prepared in a total package. Instead of just providing high quality and good priced aircrafts, [KAI will] provide others additionally like the industrial revolution package and educational training.”

Lee added, “Our brand [KAI] isn't yet widely known. We plan to utilize the reputation Korea earned from the coronavirus to explain the brand value.”