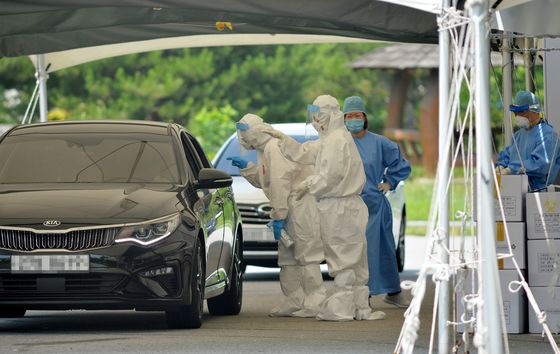 Medical staff examine passengers for symptoms of the coronavirus at a Covid-19 drive-thru screening clinic in Daejeon on Sunday. [KIM SUNG-TAE]

At least 11 passengers who flew into Korea last Thursday on the same flight from Dhaka, Bangladesh, have tested positive for the coronavirus, health officials said, raising concerns about an uptick of imported Covid-19 cases while homegrown clusters continue to emerge.

Health officials said it seems the passengers got infected in Bangladesh and were asymptomatic when they boarded Korean Air flight KE9656 from Dhaka’s Hazrat Shahjalal International Airport last Wednesday at 8:53 p.m., which landed in Incheon International Airport on Thursday at 5:41 a.m.

Nine patients — two Koreans and seven Bangladeshi nationals — each tested positive upon arriving at a government-run quarantine facility or their homes, where they had to self-isolate for two weeks, the incubation period of the virus. Two other foreigners who arrived on the same plane but aren’t of Bangladesh or Korean nationalities tested positive at a Covid-19 testing center in Incheon International Airport last Thursday after their symptoms were detected.

All passengers on the plane have been told to self-quarantine for two weeks and get tested for the virus. Health officials didn't reveal exactly how many people were on the plane, but the capacity is known to be about 284 seats.

While contact tracing is ongoing, authorities expect their impact on local communities to be minimal because the infected passengers had mostly gone straight to quarantine after landing at the Incheon airport.

But three Bangladeshi passengers who were later diagnosed with the coronavirus flew from Gimpo International Airport in Gangseo District, western Seoul, to Jeju Island last Thursday after arriving from Dhaka in order to travel to a university on the island, where they study.

A total of about 70 people who were on the same T'Way TW713 and Jeju Air 7C117 flights or had close contact with the students have all been told to self-quarantine.

Kwon Jun-wook, deputy director of the Korea Centers for Disease Control and Prevention (KCDC), said Saturday in a press briefing that Korea was experiencing an uptick of imported Covid-19 cases lately as foreign countries lift their lockdowns despite increasing Covid-19 cases, and as manual laborers from those countries arrive in Korea in search for work on fishing boats or in agriculture.

Kwon said the issue shouldn’t be a subject of “grave concern” for Koreans because the nation’s rigorous quarantine system has been keeping close tabs on them through a two-week mandatory self-isolation period, during which they have to file daily reports about their symptoms to local health authorities.

A far more vexing issue for health authorities right now is the growing cases of domestic clusters, Kwon noted, and how they’re spreading to other communities. 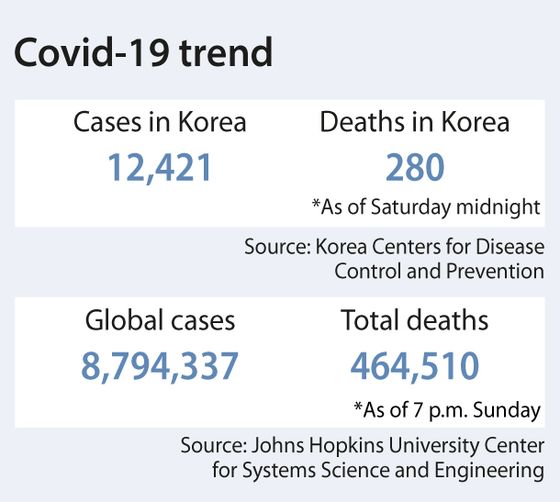 The KCDC announced Sunday morning that 48 new Covid-19 cases were detected across the nation Saturday, 67 cases on Friday and 49 cases on Thursday. Among those figures, domestically infected cases represented 40, 36 and 32 cases respectively.

Most domestic cases have been reported in Daejeon and the Seoul metropolitan area — Seoul, Incheon and Gyeonggi.

By Saturday midnight, 280 people had died, while 10,868 people had been declared fully recovered.

At least 15 Covid-19 cases have been traced to a Lotte Confectionery distribution center in Uiwang, Gyeonggi, just south of Seoul, making it one of the latest hot spots with full potential to grow. Gyeonggi officials said Sunday that most cases were workers of the distribution center, while about four are their relatives. One lives in Seoul, while the rest are scattered across various cities in Gyeonggi, officials said.

The first person to have been diagnosed in the Lotte Confectionary cluster was a 66-year-old man who lives in Gunpo, Gyeonggi. He received his positive test results last Wednesday after coming down with a fever the day before. How he got infected is yet unknown, but health officials believe more Covid-19 cases will be detected in the coming days as contact tracing is ongoing.

A string of infections in Daejeon are also on the rise, with most cases coming from several marketing businesses involving older people.