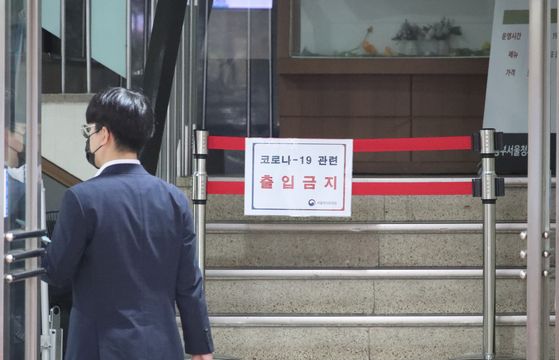 The cafeteria of the government complex in central Seoul is shut on Friday after one of its visitors tested positive for the new coronavirus. [YONHAP]

Korea's virus fight continues with a steady rise in new cases and untraceable infections, along with a spike in imported cases.

Health authorities warned of another possible wave of infections.

The country added 49 new cases on Friday, including 32 local infections, raising the total caseload to 12,306, according to the Korea Centers for Disease Control and Prevention (KCDC).

The number of new daily Covid-19 cases marks a slight slowdown from a three-week high of 59 a day earlier.

Of the locally transmitted cases, 26 were reported in the densely populated Seoul and nearby metropolitan areas, where around half of the country's 50-million population lives.

The Seoul metropolitan area accounted for most of the newly added virus cases this month.

The country has also seen an uptick in the number of infections outside of the capital region as well as in imported cases.

Six cases were reported in Daejeon, stoking concerns that community spread may further accelerate outside the greater Seoul area.

The country reported 17 additional imported cases, raising the total number of such cases to 1,396. Of the newly identified cases, 11 were found at airport screening checkpoints.

"It is worrisome that cluster infections have been reported outside Seoul, and we will speed up the testing of potential cases and contact tracing to stem further spread," Son Young-rae, an official with the Central Disaster and Safety Countermeasure Headquarters, said in a daily briefing.

In early May, the country eased its strict social distancing due to the flattened virus curve. The number of new daily cases peaked in late February at more than 900.

But a series of sporadic cluster infections in the Seoul area soon emerged. Cases tied to a church and a door-to-door retailer in Daejeon reached 25 as of Thursday, up 10 from the previous day, according to the KCDC.

Infections in the greater Seoul area also showed no clear signs of a slowdown.

Cases traced to the door-to-door retailer reached 180 as of Thursday. Patients linked to small churches in the Seoul area came to 119.

A mechanic who visited a government complex in central Seoul last week also tested positive for the virus a day earlier, forcing the building to shut down its cafeteria. Two staff members who had contact with the patient, however, tested negative.

There were no additional deaths Friday, keeping the total death toll at 280.

Health authorities said it is worrying that Korea has been experiencing a hike in older new patients.

Patients aged 50 and above accounted for a whopping 55 percent of new infections in the first two weeks of June, marking a drastic rise from only 12 percent posted a month earlier.

The total number of people released from quarantine after full recoveries stood at 10,835 Friday, up 35 from the previous day.

At least six Bangladeshi nationals and one South Korean tested positive for the coronavirus after entering South Korea on a flight from Bangladesh, authorities said Friday.

All of the seven patients, including three Bangladeshi students enrolled in a Jeju university, were on Korean Air flight KE9656, which landed at Incheon International Airport at 5:32 a.m. Thursday after departing from Dhaka, the capital of Bangladesh.

They traveled to their homes or other residences around the country before taking Covid-19 tests at testing centers in Jeju, Incheon, Paju and Namyangju in Gyeonggi, and North Jeolla, authorities said, noting epidemic research has been launched for the airplane and all of its passengers.

All of the 18 students took Covid-19 tests on landing at Jeju airport, and three of them tested positive, Jeju's provincial government said, noting that none of them showed symptoms.

Another student's test was inconclusive. The remaining 14 students tested negative.

The Bangladeshi students are known to have used four different flights to travel from Gimpo airport to Jeju after taking taxis from Incheon airport to Gimpo. The three infected students arrived at Jeju airport on T'Way flight TW713 at 12:52 p.m. and Jeju Air flight 7C117 at 1:44 p.m.

In addition, three Bangladeshi migrant workers tested positive for the coronavirus in Incheon, Paju and Namwon, North Jeolla, respectively, after arriving there via the same Korean Air flight Thursday. But four other Bangladeshis who traveled with the Paju worker tested negative.

According to authorities, a 13-year-old Korean boy, who boarded the same Korean Air flight to return home from Bangladesh, tested positive for the virus at a community health center near his home in Namyangju. The boy has reportedly attended school in Bangladesh since last August. Coronavirus tests are planned for his family members, who were ordered to self-isolate in their home.

Earlier this week, two foreigners were found infected with the coronavirus after arriving in Yangju, Gyeonggi, from Pakistan and the Philippines.

Under compulsory quarantine measures, all people coming from overseas — both Koreans and foreigners — are obliged to self-isolate in their residences or government-designated facilities for 14 days.

Bangladesh has recently reported a surge in Covid-19 patients, with its cumulative number of confirmed cases tallied at 94,481 as of Thursday, compared with 83,293 in China, 41,216 in Singapore, 40,400 in Indonesia and 26,781 in the Philippines. The number of daily new infections in Bangladesh exceeded 3,000 for three days in a row this week.

"There could be an explosive increase in coronavirus cases [in Bangladesh], as coronavirus tests are reportedly conducted for some seriously ailing patients in the country. Some entry restrictions appear needed in this situation. Otherwise, it is necessary to consider requiring a Covid-19-negative certificate from people who have an unavoidable reason to enter [Korea]," said a university professor in Seoul.

Covid infections top 20,000 but many cases are mild