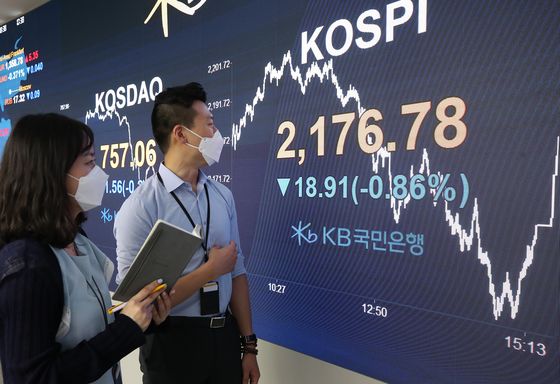 Employees look at the screen in the dealing room of KB Kookmin Bank, in the financial district of Yeouido, western Seoul, Thursday. [YONHAP]

Stocks closed lower to end a nine-day winning-streak on Thursday, with a gloomy outlook from the U.S. Federal Reserve for the pandemic-hit economy spooking investors. The won fell against the greenback.

His remarks also cast a shadow over Korea's export-dependent economy.

Korea's exports dropped for 14 consecutive months between December 2018 and January 2020, partly due to the prolonged U.S.-China trade dispute.

The United States, along with China, are Korea's largest trade partners.

Institutions offloaded a net 1.18 trillion won, the largest single-day sell-off since 1.24 trillion won tallied on May 31, 2018.

Retail investors, on the other hand, scooped up a net 1.27 trillion won, the largest amount since 1.7 trillion won on May 4. Foreigners dumped a net 116.1 billion won.

The local currency closed at 1,196.40 won against the dollar, up 5.20 won from the previous session's close.