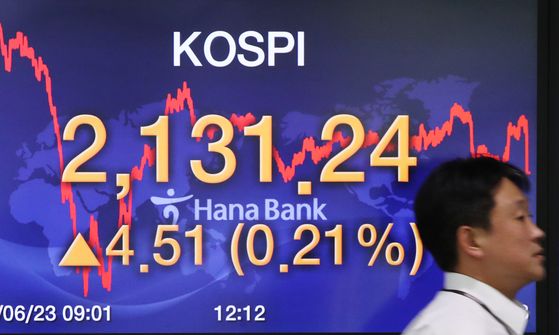 An employee stands in front of the screen with the final Kospi at the dealing room in Hana Bank, in Jung-district, central Seoul, Tuesday. [YONHAP]


Stocks traded higher Tuesday on eased concerns over the U.S.-China trade dispute. The won rose against the dollar.

The Kospi got off to a strong start, led by large tech gains on Wall Street.

But the Kospi trimmed earlier gains on market-jolting comments by White House trade adviser Peter Navarro, who said that the U.S.-China trade negotiations are "over."

Navarro said his words were taken out of context.

The local currency closed at 1,208.80 won against the dollar, down 7.0 won from the previous session's close.