Park Hyun, CEO of We Mobility, sat down with the JoongAng Ilbo for an interview on June 18. [PARK MIN-JE]

Carpooling never took off in Korea. Uber tried and failed to launch here, and local companies like Poolus and Tada built up a significant user base only to be pushed out by hostile legislation and lobbying from influential taxi companies. Yet despite the obvious hurdles, carpooling start-up We Mobility has decided to throw its hat into the ring.

We Mobility has applied to try out its carpooling service, We Pool, under a regulatory sandbox program by the Ministry of Science and ICT. 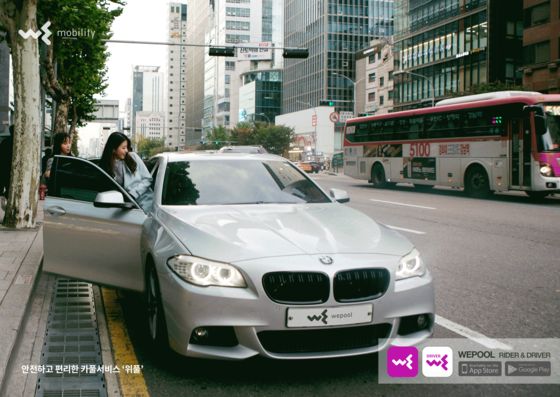 We Mobility applied for a regulatory sandbox last month to launch its carpool service. [WE MOBILITY]

We Pool faces an uphill struggle. Tada Basic, operated by VCNC, was probably the most successful local carpooling or ride-hailing company. Operating more like a ride-hailing service, Tada used 11-seat vans to ferry passengers around. The service accumulated 1.7 million users before it called it a day on April 10, a month after the National Assembly passed the Passenger Transport Service Act, known as the Tada Prohibition Act, which restricts renting vans with drivers to touring purposes only.

"The current Passenger Transport Service Act that was revised last year only allows the use of taxis within a mobility platform. Mobility start-ups that cannot afford to buy or rent cars are on the edge of a cliff," said Park Hyun, CEO of We Mobility.

“Although the government says it will reduce the cost of acquiring taxi licenses for start-ups seeking platform businesses, that does not help much,” Park said. “Since the purpose of the carpool law is to reduce traffic congestion, we need to develop an intermediate server for peer-to-peer (P2P) car-sharing without having to buy or rent cars."

According to Article 81 of the Passenger Transport Service Act, personal vehicles cannot be used for business purposes. But carpooling during commuting hours is an exception and start-ups have previously used this loophole.

That was how Poolus and Luxi, a carpool platform that connects drivers with riders, were able to run their businesses. Luxi was eventually bought by Kakao Mobility. Park, the former chief marketing officer at Luxi, left the company to start We Mobility in 2018.


Exploiting that loophole did not go down well with the powerful taxi unions, who argued that the carpooling services were operating outside of rush hour. When Kakao Mobility attempted to launch a carpooling service in December 2018 based on its acquisition of Luxi, the taxi industry backlash was intense.

To appease the taxi drivers, with whom Kakao Mobility operates a huge part of its business, the company promised that it would only use its carpooling services from 7 a.m. to 9 a.m. and 6 p.m. to 8 p.m.


Nevertheless, the compromise was reflected in the revision of the Passenger Transport Service Act in August last year. WITS Mobility, which ran the carpooling service Udigo, immediately terminated its service and Poolus later gave up as well.

"The revision does not properly reflect the reality of commuting hours in Korea — it's unrealistically short," said Park. "It is difficult to gather carpool participants in a situation where it may become illegal if they get out of the car at 8:01 a.m., just after the carpool permit time."

Realizing that it has become difficult to continue its business, We Mobility tried to find a middle ground. To prevent drivers operating outside commuting hours — which the taxi industry is mostly concerned about — the company created a platform that only works during commuting hours, but with more realistic commuting hours.

"If we add a carpool option to consumers without attacking taxi drivers’ rights, we can solve the commuting traffic problem," said Park. "More than 1 million long-distance commuters are traveling between Seoul and Gyeonggi every day using their cars, and 86 percent of them are driving alone. The goal is to match 1.3 million commuters using public transportation with these drivers to reduce social costs and improve the quality of commuting." 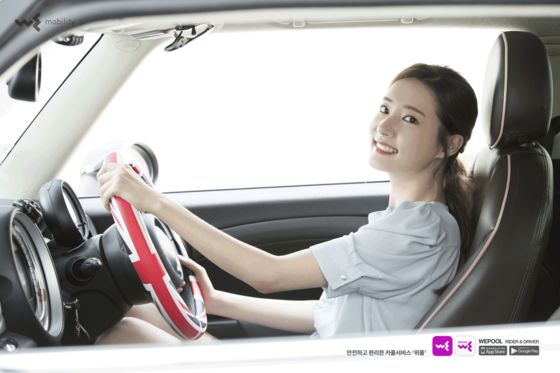 We Mobility applied for a regulatory sandbox last month to launch its carpool service. [WE MOBILITY]

We Mobility has developed a system that only matches carpool users after verifying that they are carpooling for commuting purposes. The trip has to be a long-distance trip of more than 10 kilometers (6 miles), which is longer than the average taxi trip, at 5.4 kilometers, and members can be matched only if their regular commuting routes match for at least 70 percent of the journey.

To eliminate the controversy over paid transportation, the fare is about 3,500 won ($2.90) for 10 kilometers, which is only 50 to 75 percent of the standard taxi cost. In order to make this work, the company has applied for a regulatory sandbox to extend commuting hours to from 5 a.m. to 10 a.m. and from 6 p.m. to 11 p.m. The time allowed for carpooling will be increased from a total of four hours a day to 10 hours. The target areas are Seoul, Gyeonggi, Busan and Ulsan.

"Even if we increase commuting hours, it will be difficult for drivers to turn full-time because the fare is lower than the operating cost," Park said. "As we revised it to comply with the taxi drivers’ demands, I hope we can get a chance to start the carpooling service."

But getting that regulatory sandbox is certainly not guaranteed.

"I applied for a regulatory sandbox, but I'm clutching at straws," Park said. "Since the passage of the revised bill last year March that put restrictions on carpooling hours, our number of employees has decreased from 23 to 13 and the remaining employees are currently working for free. Our goal is to upgrade mobility and fintech industry data with user data obtained from carpooling services."