(G)I-DLE
July 5: Six-member rookie girl group (G)I-DLE will hold an online concert after its scheduled world tour has been called off due to the ongoing coronavirus pandemic. The group was slated to hold concerts across 32 countries starting April.
Having debuted in 2018, (G)I-DLE has released hits like “Senorita” (2019) and “Latata” (2018). Their music is so well received in and outside the country that the group recently signed a partnership with New York-based Republic Records in May to advance to the North American market.
The concert starts at 3 p.m. It is available through Cube TV or the official website of the girl group.
Tickets are priced at 39,000 won ($32).

THE KOREA WORLD DANCE STARS FESTIVAL 2020
Seoul Arts Center, CJ Towol Theater
June 27, 28: Famed ballet dancers, who currently belong to foreign ballet companies, get together to perform a gala as part of the annual Ballet Festival Korea. It is a rare chance to see up-and-coming ballet dancers on one stage.
Dancers include Kang Ho-hyun of the Paris Opera Ballet, Han Sung-woo of the American Ballet Theatre, Lee You-rim of the Hungarian National Ballet and Lee Sun-a of Compagnie Le Guetteur.
A total of 11 ballet pieces will be staged including pas de trois from “Le Corsaire” and pas de deux from “Don Quixote.”
Ballet Festival Korea, in its 10th year, is the largest ballet festivity held on home soil.
The performance starts at 7 p.m. on June 27 and 5 p.m. on. June 28. Tickets range from 30,000 won to 80,000 won.
Nambu Bus Terminal Station, line No. 3, exit 5.

CHA_ME
Chungmu Arts Center, Middle Theater Black
Through July 5: Cha Mi-ho is a struggling young woman who makes a living by working part-time at a convenience store. She keeps applying for jobs but never gets any opportunities. Nothing comes easy for Mi-ho, whether it is getting a job or being in a relationship.
Mi-ho kills time by looking at her social media, but it ends up making her feel more miserable because it seems like everybody except for her is living their best life by going on dates with their handsome boyfriends or taking beautiful trips.
One day, Mi-ho accidentally drops and breaks her smartphone, and her alter ego Cha_Me, a perfect version of her dwelling in the world of social media, comes to life.
The original musical “Cha_Me” touches upon the issue of social media addiction through a diverse range of characters.
Tickets range from 44,000 won to 66,000 won.
The musical starts at 8 p.m. during weekdays; 3 p.m. and 7 p.m. on Saturdays and 2 p.m. and 6 p.m. on Sundays and national holidays.
There are no shows on Mondays.
Sindang Station, lines No. 2 and No. 6, exit 9. 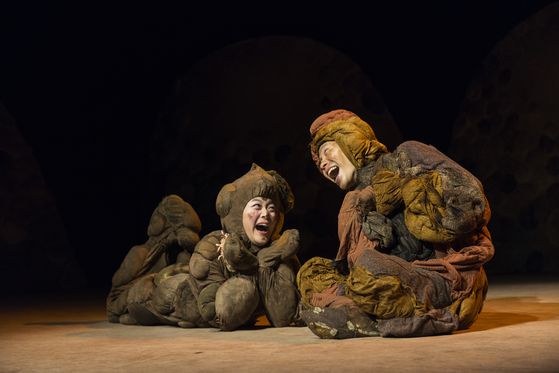 "The Dandelion's Story" will kick off at the Seoul Arts Center in southern Seoul next month. [SEOUL ARTS CENTER]

THE DANDELION’S STORY
Seoul Arts Center, Jayu Theater
July 16 - 29: One of the most beloved children’s books, “Doggy Poo,” written by Kwon Jung-saeng, is being staged as a theatrical performance.
The performance is part of Seoul Arts Center’s annual Kids & Family Festival, and, as the title implies, follows the life of a dog's poo.
The poo is shunned by every person and animal it meets on the road. When it compares itself to cow poo, used to enrich the soil, the dog poo considers itself good-for-nothing and resolves to find its purpose in life.
The performance starts at 11 a.m., 3 p.m. from Tuesdays to Fridays and Sundays; 11 a.m., 2 p.m. and 5 p.m. on Saturdays. There are no shows on Mondays. Children must be aged three or above to enter.
Tickets range from 25,000 won to 40,000 won.
Nambu Bus Terminal Station, line No. 3, exit 5.

ONEGIN
Chungmu Arts Center, Grand Theater
July 18 - 26: Universal Ballet Company presents “Onegin.” The ballet is based on Alexander Pushkin’s novel “Eugene Onegin” and was choreographed by famed ballet dancer and choreographer John Cranko for the Stuttgart Ballet in 1965. Kurt-Heinz Stolze rearranged the music of Pyotr Ilyich Tchaikovsky.
“Onegin” premiered on home soil in 2009 by Universal Ballet Company.
Unlike other famous ballet pieces such as “Swan Lake” and “The Sleeping Beauty” with fairy-tale love stories, “Onegin” depicts the realistic and entangled relationship of a man and a woman.
In order to maximize the emotions of the protagonists, Cranko reportedly used repetitive jumps and lifts throughout the story.
The performance starts at 7 p.m. on July 18, 2 p.m. on July 19, 25 and 26 and at 8 p.m. on July 23 and 24.
Tickets range from 40,000 won to 100,000 won.
Dongdaemun History & Culture Park Station, line No. 2, 4 and 5, exit 2. 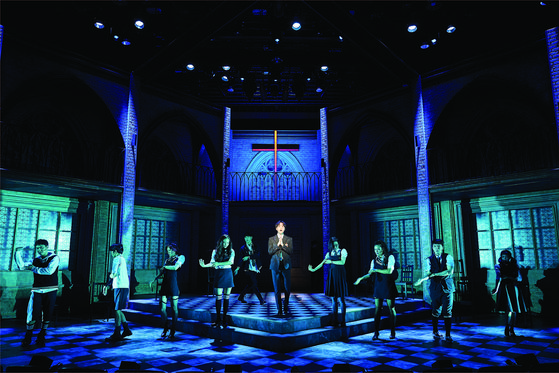 BARE: THE MUSICAL
Doosan Art Center, Yonkang Hall
Through Aug. 23: Against the backdrop of a highly conservative Catholic boarding school, this coming-of-age rock musical revolves around the relationship between two teenage boys Peter and Jason. The two are in love. Peter wants to come out of the closet and wants to see their relationship become official, but Jason doesn’t want to in fear of losing everything he has.
Meanwhile, an audition opens among students for the upcoming theatrical performance “Romeo and Juliet” and Jason is cast as Romeo while Ivy, a mutual friend of Peter and Jason, lands the role of Juliet. Rehearsal begins and Ivy is entangled in the relationship of the two teenage boys.
The relationship of Jason and Peter enters a new phase, too. As Jason wants to break up with Peter, their relationship begins to deteriorate. The musical sheds light on the growing pains of teenagers.
The story is based on a book written by Jon Hartmere.
The musical is rated over for those who are 15 or over.
It starts at 8 p.m. on Tuesdays, Thursdays and Fridays; 3 p.m. and 7 p.m. on Saturdays and 2 p.m. and 6 p.m. on Sundays and national holidays. There are no shows on Mondays.
Tickets range from 66,000 won to 88,000 won.
Jongno 5-ga station, line No. 1, exit 1.