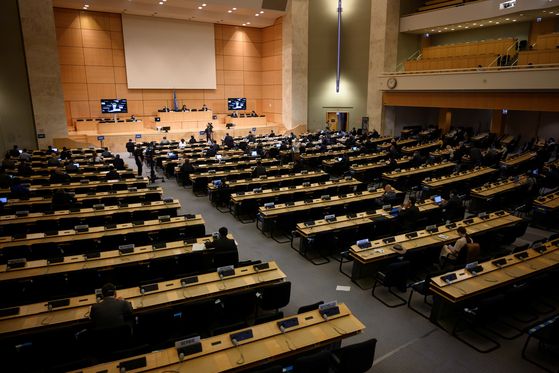 The United Nations Human Rights Council on Monday adopted a resolution condemning North Korea's human rights violations for the 18th consecutive year, while noting that the ongoing coronavirus pandemic could lead to a further deterioration of the country's humanitarian situation.

The Human Rights Council resumed its 43rd session in Geneva after a hiatus caused by the Covid-19 outbreak and passed the resolution by the consensus of its 47 member states, including South Korea. The council expressed that they are “deeply concerned at the systematic, widespread and gross human rights violations” in North Korea.

South Korea was not a co-sponsor of the resolution for the second year, reflecting the ongoing tensions on the Korean Peninsula and efforts to bring the North back to the dialogue table. Pyongyang has in the past responded with hostility to such resolutions and international criticism of its human rights situation.

Seoul’s Ministry of Foreign Affairs said in a statement Tuesday that the South Korean government “participated in the consensus process of this year’s resolution in line with its basic position that it works with the international community toward substantial improvements in the human rights situation of the people of the DPRK,” referring to the North’s official name, the Democratic People’s Republic of Korea.

While the resolution this year is similar to previous years, new elements included concern over the possible deterioration of human rights and humanitarian issues in North Korea caused by the coronavirus pandemic, with an emphasis on the importance of timely assistance to the North in the event of a Covid-19 outbreak in the country. It also urged North Korea to work with the international community to prevent such an outbreak.

Officially, North Korea claims that there are no cases of coronavirus in the country.

“Same as last year, we didn’t co-sponsor [the resolution] taking into consideration in a comprehensive manner all sorts of matters including the Korean Peninsula situation," Kim In-chul, Seoul’s Foreign Ministry spokesman, said in press briefing Tuesday.

A report to the Human Rights Council released in May by the special rapporteur on the situation in North Korea described that the “human rights situation may further deteriorate as a result of reported lower crop production in 2019; tightened border control; continuing surveillance and trade bans under the current threat of the coronavirus disease; and the impact of continued sanctions.”

This report noted that the “deadline of the Democratic People’s Republic of Korea for resuming denuclearization and peace talks with the United States” passed on Dec. 31, 2019, “without any significant developments.”

The 43rd session of the Human Rights Council kicked off on Feb. 24 and was supposed to end March 20, but was suspended on March 13 as the coronavirus outbreak intensified. The session resumed June 15 and concluded Tuesday.