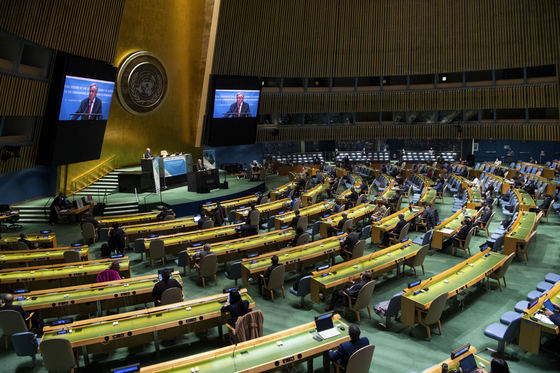 The UN General Assembly holds a special session in response to the Covid-19 pandemic at the UN headquarters in New York on Dec. 3. [XINHUA/YONHAP]

The United Nations General Assembly on Wednesday adopted a resolution calling for improving the human rights situation in North Korea for the 16th consecutive year.

The resolution condemning the systematic, widespread and gross violations in North Korea, including those that may amount to crimes against humanity, was passed without a vote by the New York-based General Assembly.

The resolution especially expressed very deep concern that the “precarious humanitarian situation” in North Korea could “rapidly deteriorate” amid the Covid-19 pandemic.

South Korea was not a co-sponsor of the resolution, drafted by the European Union, for the second consecutive year. There were 58 co-sponsors included the United States, Canada and Japan.

This is the fifth consecutive year that a North Korean human rights resolution was passed without a vote, indicating widespread recognition of and consensus on the seriousness of the issue within the United Nations.

The resolution again called on the UN Security Council to consider taking “appropriate action to ensure accountability,” including referring the situation to the International Criminal Court and taking into consideration "further sanctions in order to target effectively those who appear to be most responsible for human rights violations.”

The assembly expressed concern over the reports of torture, inhumane conditions of detention, sexual violence, public executions, extrajudicial and arbitrary detention and the absence of due process of law. The resolution also noted the continued existence of an extensive system of political prison camps, enforced and involuntary disappearances and forceful repatriations of refugees and asylum seekers to North Korea.

Taking into consideration the coronavirus situation, the resolution called on the North to allow humanitarian organizations to “carry out their activities in the context of the Covid-19 pandemic.”

It also urged countries “which have an ongoing dialogue with the Democratic People’s Republic of Korea [DPRK] to continue to advocate for the establishment of lasting peace and security in the Korean Peninsula and to address the human rights situation.” The DPRK is North Korea's official name.

The assembly has passed a resolution on the North Korean human rights condition since 2005.

North Korea has consistently objected to such resolutions condemning its human rights situation.

Kim Song, the North Korean ambassador to the United Nations, said that he “categorically rejects” the resolution, which he characterized as a “grave politically motivated provocation,” according to a UN press release Wednesday.

He accused the UN report on the human rights situation in North Korea as having been “cooked up by riff raff defectors” attempting to effectuate regime change and said “such schemes will be faced with strong countermeasures.”