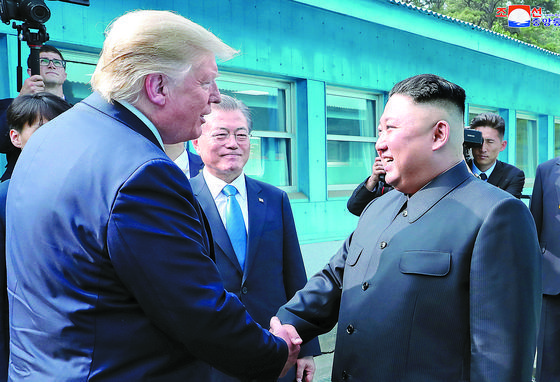 The Moon Jae-in administration has tried to play a mediating role in the North-U.S. negotiations to resolve the denuclearization issue, but Pyongyang and Washington are seen to be giving Seoul the cold shoulder.

Kim Yo-jong, first vice department director of the Central Committee of the North’s Workers' Party and the closest aide to leader Kim Jong-un, issued a strongly-worded statement earlier this month blaming Seoul for not preventing defector groups from sending propaganda leaflets across the border. Last week, North Korea blew up the joint liaison office in Kaesong and has been threatening further action.

Bolton, who served as top security adviser to U.S. President Donald Trump until September, portrayed President Moon Jae-in as a third wheel who tried to secure involvement during the encounters between Kim and Trump in his memoir released Tuesday, "The Room Where It Happened."

Moon in his Berlin speech in July 2017 at the Körber Foundation in Germany stressed the importance of South Korea taking the “driver’s seat” to "lead Korean Peninsula-related issues based on cooperation with our neighbors."

Diplomacy with North Korea gained momentum with the PyeongChang Olympics in February 2018, attended by Kim Yo-jong, who led a delegation from Pyongyang to the opening ceremony of the Winter Games. The Olympic détente paved the way for the first inter-Korean summit between Moon and North Korean leader Kim Jong-un on April 27, 2018, and the first Kim-Trump summit on June 12 in Singapore later that year. North Korea suspended nuclear and missile testing in the spirit of diplomacy, and Moon’s mediating efforts leading to the North-U.S. denuclearization negotiations was generally well-received by the public, through there also were skeptics.

But North-U.S. denuclearization negotiations have been at a standstill since last year, and analysts are again voicing concerns over Seoul's approach of playing the mediator role.

Some experts have worried that the Moon administration jumped into playing the mediating role without confirming North Korea’s true intentions, and without a feasible comprehensive roadmap to denuclearization. In the event things didn’t work out, the blame could fall on Seoul, those experts said. Such concerns surfaced following the collapse of the second Kim-Trump summit in Hanoi in February 2019, as the two sides clashed over sanctions relief and scope of denuclearization.

Lee Geun, president of the Seoul-based Korea Foundation, in a column published after the Hanoi summit in 2019 wrote that in the event Seoul does not confirm the intentions of Pyongyang to denuclearize, “We could be accused of having deceived North Korea or the United States, or even driven to the status of an ‘insincere mediator.’”

Ahead of the first North-U.S. summit, Moon is described by Bolton as having pushed for the meeting to be held at the inter-Korean truce village of Panmunjom and to hold a trilateral summit immediately afterward.

Bolton wrote, “This was largely a Moon effort to insert himself into the ensuing photo op (as we would see again in June 2019).” Later on in the book, Bolton contends that Moon also tried hard to be a part of the third Kim-Trump meeting at the demilitarized zone on June 30, 2019, despite neither Trump nor Kim both being keen on it.

He added, “The United States could suspect our mediating skills and intentions, and in the worst case scenario, we may have to take all the responsibility.”

Kim Yo-jong in a scathing June 17 statement said that the South Korean president is expected to take “full responsibility for North-South relations irrespective of whether they turn out good or bad.” She said that inter-Korean relations reached a "catastrophic phase.”

Thus, experts are pointing out that now may be a time for introspection by Seoul on future diplomatic strategy with Pyongyang and Washington.

“We will decrease our leverage if we continue to cling to inter-Korean dialogue when it has already been rejected by the North,” said Wie Sung-rak, a former South Korean chief nuclear negotiator. “The North-U.S. talks continue to remain open and the only path forward is the North-U.S. dialogue reviving the momentum of the South-North talks.”

Wie added, “While the United States has presidential elections coming up and President Trump is on the defense, it isn’t that he doesn’t have the intention to revive the momentum of negotiations in the working level. South Korea has to revive even that slim gap.”

Yun Duk-min, former chancellor of the Korea National Diplomatic Academy, said, “In 2017, North Korea began a peace offensive based on the results of its sixth nuclear test of a hydrogen bomb, and U.S. President Trump accepted this. It would be misleading to completely credit it as the result of South Korea's mediator diplomacy.”

He added, “Now may be the time to level-headedly analyze the situation and to consider a change in policy toward North Korea"