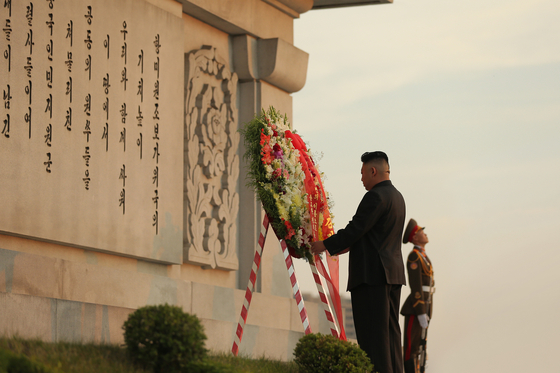 North Korean leader Kim Jong-un places a wreath at the Friendship Tower, commemorating Chinese soldiers who were killed in the Korean War, in Pyongyang on Wednesday, in a photo carried by the North’s Korean Central News Agency (KCNA). [KCNA]


Despite the restoring of inter-Korean communication lines Tuesday and speculation of a possible summit, Pyongyang has not sent any signs of its intention to denuclearize so far.

The Blue House has indicated that the restoration of the inter-Korean hotlines is the "starting line" toward the ultimate goal of complete denuclearization, and Washington also immediately welcomed the move as a step in that direction.

The U.S. State Department on Tuesday called the restoration of the inter-Korean communication lines a "positive step," adding that "diplomacy and dialogue are essential to achieving complete denuclearization and establishing permanent peace on the Korean Peninsula."

On Tuesday, the two Koreas revived four hotlines that were unilaterally severed by Pyongyang 13 months ago on June 9, 2020, in protest of what it claimed were Seoul's failures to prevent activists from sending propaganda leaflets across the border. The announcement was made simultaneously by Seoul and Pyongyang after a series of letter exchanges by President Moon Jae-in and North Korean leader Kim Jong-un since April, which led to the decision to revive these communication lines.

However, after the initial announcement on its official Korean Central News Agency (KCNA), meant for external audiences, North Korea has not been reporting on the news of the restored inter-Korean hotlines domestically through its Rodong Sinmun or state-run television.

While Pyongyang has refrained from extreme provocations recently, it has also yet to indicate willingness to denuclearize, the next step to return to meaningful dialogue.

South Korean Foreign Minister Chung Eui-yong said Wednesday that "North Korea is maintaining a moratorium on nuclear tests and long-range missile launches" since the North-U.S. summit in Hanoi in February 2019, but such a commitment to denuclearization has yet to be confirmed by Pyongyang.

Since the beginning of last year, North Korea has closed off its borders due to the Covid-19 pandemic, which has further burdened the country which has already been facing stiff international sanctions.

Thus, some analysts point out that North Korea may have been pushed to restore the inter-Korean communication lines because of its food crisis and Covid-19 vaccine situation.

North Korean leader Kim in a speech at the National Conference of War Veterans Tuesday carried by its official Rodong Sinmun Wednesday, said, "Today the difficulties and obstacles caused by the world health crisis unprecedented in history and the protracted blockade are no less harsh for us than those in the wartime situation."

His speech in the English-language report compared the current Covid-19 situation and international sanctions to the difficulties of the 1950-53 Korean War. Tuesday marked the 68th anniversary of the armistice agreement that ended the three years of fighting.

North Korean media earlier this week reported on damage to crops in North Korea because of drought, and Kim publicly admitted to a food shortage in the country at a key ruling Workers' Party meeting last month.

The Rodong Sinmun reported Tuesday that "thousands of hectares" of rice and corn fields have withered in the extreme heat and lack of precipitation in South Hwanghae Province, and that many corn and bean fields in North Hamgyong Province also suffered from drought.

North Korea is expected to face a food shortage of about 860,000 tons this year, the UN's Food and Agricultural Organization estimated in a report released last month.

Despite the Joe Biden administration indicating it has no plans to offer sanctions relief for the sake of dialogue at the moment, Seoul has been considering incentives for Pyongyang to return to talks such as coronavirus vaccine cooperation.

North Korea officially claims it has no Covid-19 cases. It has yet to receive vaccine shipments through the Covax Facility, and reportedly has not been cooperative with the global vaccine-sharing mechanism led by the World Health Organization (WHO) and Gavi.

The South China Morning Post reported Thursday that the reopening of inter-Korean hotlines was partly because Pyongyang needs food aid from Seoul and Beijing.

Zhou Chenming, a researcher with the Yuan Wang military science and technology institute in Beijing, told the paper that North Korea needs "food, fuel and other goods so that it can deal with the impact of extreme weather and the pandemic."

On Wednesday, Kim placed a wreath at the Friendship Tower in Pyongyang, which commemorates Chinese troops killed in the Korean War, and stressed that the two countries' "kindred ties will be firmly carried forward generation after generation."

He referred to the "true militant friendship" of the Chinese soldiers who "fought shoulder to shoulder" with the North Korean troops "during the harsh days of the war under the uplifted banner of resisting America," according to the state-run KCNA Thursday.

Kim Ki-jung, president of the Institute for National Security Strategy (INSS), affiliated with the South's National Intelligence Service, in a visit to Washington Wednesday said that the next two weeks are very important in continuing to thaw the atmosphere with Pyongyang.

Washington needs to take more action, Kim told reporters after a seminar hosted by the U.S. Institute of Peace think tank, noting the North's economic difficulties. He said that if this critical period is bypassed, then Pyongyang could tilt toward Beijing.

He said, "If the United States through indifference loses its grip on North Korea and the Korean Peninsula issue, there is a possibility that U.S. commitment to East Asia as a whole will weaken more than expected."

Seoul and Washington are scheduled to hold their annual summertime military exercises next month, usually a time of provocation from Pyongyang. The two sides have yet to reveal the exact format it will be run in, but have been conducting scaled-down combined drills since 2018 in consideration of diplomacy with Pyongyang and also amid the pandemic.

Kim added, "If two weeks pass without any additional measures, the restoration of communication lines and letter exchanges could be to no avail."

He also said that should China push for railway cooperation with North Korea and the South misses the opportunity to pursue its joint railway project, it could bring about difficulty in creating momentum to move along inter-Korean relations.

The revived communication lines have prompted speculation of a possible fourth summit between Moon and North Korean leader Kim, though the Blue House has so far denied reports.

The two sides also have other hurdles to overcome. North Korea has yet to offer an apology over the destruction of the joint liaison office on June 16 last year, a week after it severed its hotlines with the South and as warned by Kim Yo-jong, the younger sister of the country's leader.

Seoul's Unification Ministry also said it will raise the issue of the killed South Korean fisheries official to the North since communication lines have been restored.

On Sept. 22, 2020, North Korea shot a 47-year-old official who had drifted into its waters near the inter-Korean sea border in the Yellow Sea, and burned his body. At the time, leader Kim Jong-un offered a rare apology to the South. Family members of the deceased official have been looking to find out the truth behind the killing.