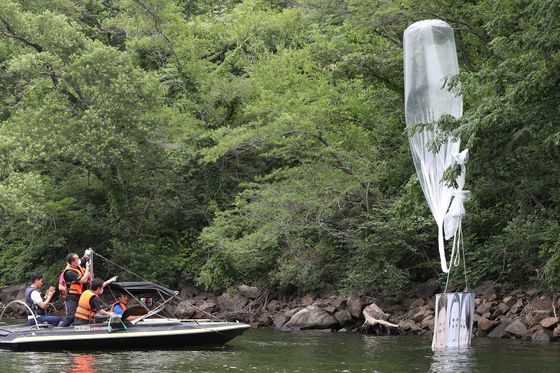 Police retrieve a balloon attached to a sign lampooning the North's ruling Kim family that anti-Pyongyang activists floated toward North Korea on Monday evening, in defiance of the South Korean government's attempts to stop them. [YONHAP]


A South Korean activist group released balloons containing anti-Pyongyang propaganda leaflets across the border in the dead of night on Monday, in defiance of the South Korean government’s attempts to prevent such acts amid heightened tensions with North Korea.

Park Sang-hak, head of the organization Fighters for a Free North Korea, said six members of his group launched 20 balloons containing half a million leaflets, 500 books advertising the success of South Korea’s capitalist system, 2,000 one dollar bills and 1,000 memory cards across the border towards the North from a secluded location in Paju, Gyeonggi, from 11 p.m. to midnight.

One of those balloons was discovered stuck on trees on the banks of a stream in Hongcheon County, Gangwon, by police Tuesday afternoon.

“In order to evade [South Korean] police surveillance, I trained members unaccustomed to dispatching leaflets to send the flyers,” Park announced, before delivering a tirade condemning the Moon Jae-in administration for attempting to silence defector groups from speaking out.

The Ministry of Unification, South Korea’s top inter-Korean agency, on Tuesday expressed “deep regret” at the act, and announced it was taking “serious” measures to punish the group for violating the government’s ban on leaflet distributions.

“The government once again stresses clearly that it will strongly respond to the dissemination of leaflets and items towards North Korea, which raise tensions between South and North and endanger the lives and safety of local residents,” the ministry stated in a press release.

The ministry spokesman raised doubts, however, about Park's claim that his group had released 500,000 leaflets Monday night, saying that based on investigations of the amount of leaflets the group prepared beforehand and the wind conditions that night, none of the released balloons appear to have entered North Korean territory.

After police confiscated the group's hydrogen gas supplies used to fuel balloon launches in the past, the group apparently obtained only enough helium to float a single balloon — likely the one found at Hongcheon, the ministry said. The balloon that was retrieved did not contain books, dollar bills or memory cards, it added.

Earlier successful leaflet campaigns by Fighters for a Free North Korea and a similar group called Keun Saem, including one on May 31, triggered Pyongyang to respond viscerally toward Seoul early this month, setting off a wave of retaliatory actions that resulted in a break in all telephone communications between the two countries and the North’s unilateral demolition of the inter-Korean liaison office in Kaesong.

The two groups are primarily run by defectors from North Korea like Park, who have since become right-wing agitators in South Korea pushing for a hard line policy toward the North Korean regime. Distribution of such leaflets has been a preferred method for the organizations, but a headache for successive administrations in Seoul hoping to avoid tensions on the border.

On June 8, the organizations attempted to send rice in water bottles to the North by floating them up from the coast of Samsan-myeon in Ganghwa County, Incheon, but their efforts were stopped by local residents concerned about North Korean retaliation.

The Unification Ministry subsequently filed charges against the two groups, accusing them of violating an act on inter-Korean exchange and cooperation, which forbids sending any materials to the North unless they are approved beforehand by the ministry.

The local governments of Gyeonggi and Incheon, which both directly border the North, also stepped up measures to prevent the acts, while police said they were mounting a 24-hour monitoring system in civilian border areas near the demilitarized zone (DMZ).

Those efforts, however, appears to have been ineffective in stopping Park and his group, which had warned earlier they would send up to a million leaflets again towards the North to mark the 70th anniversary of the outbreak of the 1950-53 Korean War.

The leaflets sent Monday night contained propaganda denouncing atrocities committed by North Korea during the war, Park said, before adding that his group was planning to send the rest of the printed leaflets — around 500,000 more — when conditions allow.

Pyongyang for its part announced last week it was preparing to mount a massive psychological warfare campaign to include launching of millions of its own propaganda leaflets toward the South. Around 12 million flyers had already been printed, a state media outlet said Monday as it released photographs of leaflets slamming South Korean President Moon Jae-in.

On Monday afternoon, the regime also set up dozens of loudspeakers across the DMZ with the intention of restarting propaganda broadcasts toward the South.

Time for a cool-headed approach (KOR)