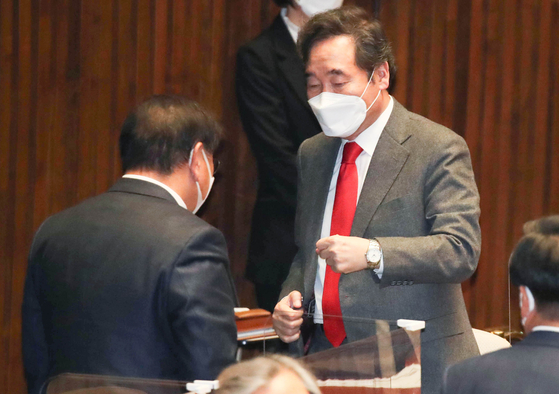 
South Korean officials are redoubling their efforts to defend a controversial new law ratified Tuesday, which criminalizes the distribution of anti-Pyongyang propaganda at the inter-Korean border.

The revision to the Development of Inter-Korean Relations Act, rammed through the National Assembly by the ruling Democratic Party (DP) last week, received international condemnation from several human rights groups and U.S. officials who claimed the law's ban on sending leaflets and other items to North Korea infringed on freedom of expression in South Korea.

On Monday, the U.S. State Department joined the chorus, albeit more implicitly, noting in a statement to Yonhap News Agency that it continues "to campaign for the free flow of information into" North Korea, as well as advocate for human rights and "fundamental freedoms."

Alarmed at the intense pushback from abroad, which included one U.S. lawmaker's threat to hold a congressional hearing on eroding civil liberties in Seoul, South Korean officials have stepped up their defense of the new law in more vocal terms.

Calling the law a necessary and minimal step to defend the safety of South Korean citizens from the North's oversensitive response to the leaflets, DP Chairman Rep. Lee Nak-yon on Monday expressed regret at the criticism leveled by U.S. lawmakers while hinting it was Seoul's sovereign right to legislate for the sake of public safety.

"All must respect the South Korean people's [right to] safety and the decision of the South Korean National Assembly," Lee said, also noting the new law remained within the bounds of international norms.

The Ministry of Unification, Seoul's top inter-Korean agency, is also more aggressively rebutting criticism from abroad.
On Tuesday, a senior ministry official announced that information sheets outlining the reasoning behind the law had been distributed to around 50 foreign embassies in Seoul throughout the week.

The document was written in the form of questions and answers about the law, intended as information for foreign envoys to cite when reporting on the issue to their home countries, the official said.

"We will strive to broaden understanding about the legislation in question by increasing communication with the international community going forward," the official added.

As part of this outreach, Vice Unification Minister Suh Ho on Sunday penned an English-language editorial for NK News, an outlet specializing in North Korea news, in which he claimed acts by domestic activists to send leaflets to the North were "irresponsible and ineffective," and actually worsened the situation for the families of defectors still in the North.

Foreign Minister Kang Kyung-wha also argued in a CNN interview last week that freedom of expression, while vital to human rights, is "not absolute," and that it can be curbed to a degree to protect citizens living near the inter-Korean border.

The Foreign Ministry's spokesman, Choi Young-sam, also responded Tuesday to the State Department's newest comment on the matter, reiterating that the new law was necessary.

Seoul has been in contact with the U.S. government, members of Congress and certain civic groups with regards to the law, Choi said, adding South Korea would continue to explain its reasoning behind the revised law in future discussions.

Upon ratifying the new law in a cabinet meeting Tuesday, Prime Minister Chung Sye-kyun called on Unification Minister Lee In-young to maintain discussions with relevant civic groups raising criticism, to which Lee replied that preparations of the law's implementation would be carried out so that "no misunderstanding" would remain.

In particular, Lee noted the government would work to rebut the false claim that the law criminalizes propaganda distribution toward the North from a third country, like China.

The ministry has noted before that the only instance in which the law would apply to such a case is when items like leaflets released from South Korean territory intended for the North enter the territory of a different country due to natural causes, like winds or tides.