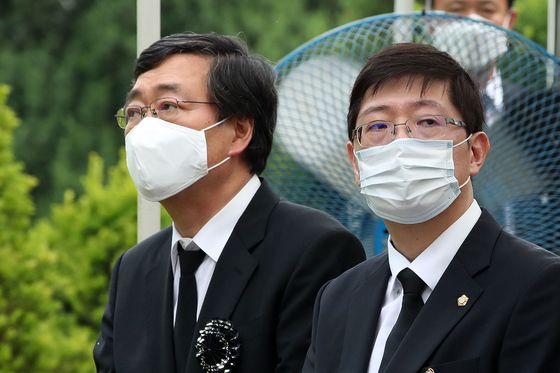 
Kim Hong-gul, a ruling party lawmaker and the youngest son of the late President Kim Dae-jung, on Tuesday said he will take necessary actions to turn his father’s house into a memorial, rejecting his half brother’s claim that the inheritance should be split.

Kim Jeong-gi, a lawyer for Democratic Party lawmaker Kim Hong-gul, held a press conference to address the legal dispute between his client and Kim Hong-gul's half brother, Kim Hong-eop. Kim Hong-eop is a former lawmaker and current head of the Kim Dae-jung Peace Center.

“I am heartbroken to see some media reports that portrayed the dispute as a fight over money,” Kim Hong-gul was quoted as saying by his lawyer.

The late president had three sons, two from his first marriage and Kim Hong-gul from his second marriage with former first lady Lee Hee-ho. The first son, Kim Hong-il, died in April 2019, two months before Lee’s death in the following June.

Kim Dae-jung, who served as president from 1998 to 2003, won the Nobel prize in 2000 for his engagement policy toward North Korea. The two surviving sons are fighting over the late president’s house in Donggyo-dong, western Seoul, along with 800 million won ($661,885) in Nobel Peace Prize award money. The house’s appraised value is about 3.25 billion won.

In January, Kim Hong-eop won an injunction from a local court that the late president’s residence must not be disposed single-handedly by Rep. Kim. The lawmaker had registered the house under his name after his mother passed away.

Kim Hong-eop argued that Rep. Kim should not be the sole inheritor of the house, citing a will Lee had created in February 2017.

According to the will, Lee said the house should become a memorial for the late president. She also said the Nobel Peace Prize money should be used to fund a memorial project.

If a local government purchases the house in Donggyo-dong to build a memorial, one third of the payment should be used for the memorial project, while the other two thirds should be divided evenly among the three sons.

Rep. Kim, however, argued the will is not binding since it was never notarized. “Rep. Kim is the sole, legitimate heir of all wealth that Lee had left,” his lawyer said.

“The will also does not say that the sons should split the ownership of the house,” the lawyer said. “It says if the house is sold, some of the payment should be split.”

According to the Civil Act, Kim Hong-il and Kim Hong-eop are not inheritors of Lee’s wealth since they have no biological tie to her, after the death of their father, the former president, in 2009.

Kim Hong-eop has said his half brother was betraying his trust. “The three brothers had agreed to the contents of the will [when it was first created],” he told the Korea Economic Daily last month. “But we didn’t notarize the will with a lawyer. I never thought he will betray me like this.”