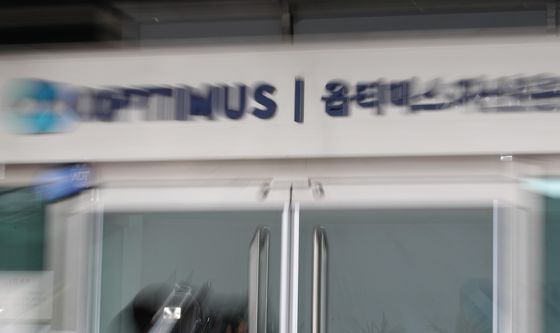 Law suits have been filed, the prosecutors are involved and investigating and counter accusations have been offered up to explain the freezing of the funds, suggesting that more of the 535.5 billion won the company has raised from investors could be stuck and inaccessible.

NH Investment & Securities acts as a broker in the selling of the fund products.

On June 18, Optimus suspended redemption of 38 billion won from Optimus Creator Fund 25 and 26 to NH Securities.

Financial companies typically freeze withdrawals when they find it hard to liquidate assets fast enough to match demand from investors who want their money back. It can be an indication of the illiquidity of the underlying assets or of more serious problems, such as unreported losses.

Korean prosecutors are looking into the case as the private equity company has been accused of fraud for deceiving brokerage firms and allegedly committing a portion of the investor funds to unlisted companies, the extending of private loans and real estate. The funds were supposed to have been 95 percent invested in receivables of state-run agencies.

According to a source at NH, Optimus fabricated depository statements sent to brokers listing holdings. The brokerage sued the private equity firm and its executives for fraud Monday.

Optimus claims that it has also been deceived, saying that its law firm fabricated the documents.

Optimus reportedly had a board of high-profile advisors, which included top-tier government officials in the Roh Moo-hyun administration, a former attorney general and a former bank president. The list is no longer on its website.

The Financial Supervisory Service (FSS) inspected the offices of Optimus last week to investigate why the redemptions were suspended and whether the private equity firm had fabricated asset reports. The results are likely to be announced next week.

The Seoul Central District Prosecutors' Office started investigating the case and placed travel bans Wednesday on key figures, including the head of asset management at the fund, fund managers and others. The prosecution plans to issue summonses soon after the FSS finalizes its investigations.

With a series of financial fiascoes in the private equity fund space, Financial Services Commission (FSC) head Eun Sung-soo said Tuesday that the commission will conduct a full-fledged investigation into some 10,000 private equity firms.

Financial regulators have been investigating documentation of 52 private equity firms from November to January after Lime Asset Management announced the suspension of more than one trillion assets.