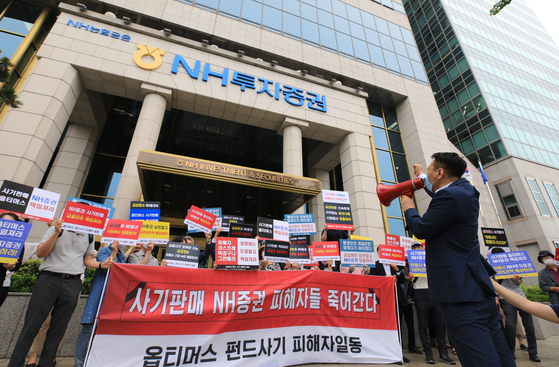 Investors in Optimus funds demand NH Investment & Securities compensate them for damages incurred in front of the brokerage firm in Yeouido, western Seoul, on July 23. The brokerage firm failed to come up with a compensation plan that day. [NEWS1]


NH Investment & Securities will provide compensation for up to 70 percent of losses suffered by investors in Optimus funds.

The announcement came after six rounds of emergency board meetings held to discuss the issue.

"The measure was to fulfill our moral responsibility as a seller, reduce secondary damage caused by customer liquidity problems and maintain customer trust in the firm," said NH President and CEO Jeong Young-chae.

Compensation will range from 30 percent to 70 percent of principal depending on the amount invested.

Corporate investors that purchase more than 1 billion won will get 30 percent of their principal returned, and the schedule will be the same for investments below 1 billion won.

Following compensation, investors will still be free to sue or propose other settlements. The initial compensation will likely cost the brokerage around 18 billion won.

Optimus Asset Management is currently under investigation for illicit transactions, embezzlement and deceiving investors and brokerages. The funds collected were supposed to be mostly invested in accounts payable of public institutions. Instead, the private equity fund fabricated documents and funneled more than 500 billion won of funds into risky assets.

The troubled private equity fund first sent a notice to NH Investment & Securities on June 18 saying it was unable to honor its obligations regarding two of its funds. More than 90 billion won of repayments have been suspended so far.

Optimus CEO Kim Jae-hyun and some members of the fund's board of advisors have been arrested and are under investigation for fraud, embezzlement and fabricating documents.

Korea Investment & Securities was the first to return up to 70 percent of the principal to investors last month.

NH Investment & Securities marketed more than 80 percent of funds sold by Optimus. According to the brokerage, it sold Optimus funds to 1,049 individual and corporate investors.