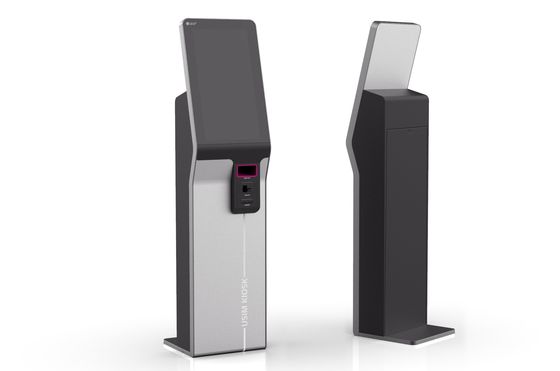 An illustrated rendering of a new digital kiosk designed to let customers register their mobile phones. [LG U+]


Major telecoms companies are rolling out digital kiosks so customers can change their phone plans and register new USIM cards in a move intended to minimize human contact in the wake of the coronavirus pandemic.

LG U+ announced Tuesday that it will develop an automated self-service kiosk by September and deploy the machine at a store in Jongno District, central Seoul, the following month.

Still, a spokesperson at the telecom unit said that the store will be staffed by people.

“We won’t remove the human workforce at the store, it can be understood that their roles will be divided,” said Do Min-seon, the spokesperson.

The users can buy USIM cards from the kiosk and activate smartphones they already own, although the kiosk doesn’t directly sell phones.

Short for Universal Subscriber Identity Module, a USIM is a form of mobile identification that contains user information.

Other functions include switching mobile plans and paying phone bills.

When problems occur, a user will either be able to get support via video call or from an artificial intelligence chatbot.

SK Telecom is also planning on launching a new form of retail channel that could limit contact between humans, including the introduction of digital kiosks.

“We haven’t decided yet whether we will place [those machines] at a new store or in retail stores,” a source at SK Telecom said.

KT has run self-service kiosks since 2018.

Located at 30 KT stores across the country, the digitized platform allows for the payment of monthly bills and changing phone number, as well as registering for extra services.