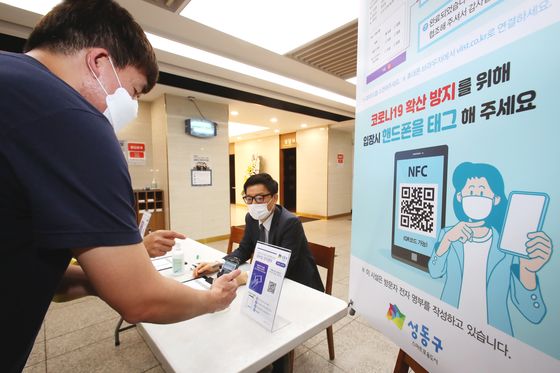 The country added 39 cases, including 27 local infections, raising the total caseload to 12,602, according to the Korea Centers for Disease Control and Prevention (KCDC) on Friday morning.

The tally rebounded from 28 new Covid-19 cases detected Wednesday. New daily virus cases have remained in the 30 to 50 range since they hit 67, the most in a month, on June 20.

"The number of new locally transmitted cases has somewhat slowed, but sporadic cluster infections are spreading in the central Chungcheong provinces beyond the bigger Seoul area," Yoon Tae-ho, a senior health official, said in a briefing.

Cases tied to a door-to-door sales establishment in Daejeon came to 72 as of noon Friday.

The country has reported five cases traced to a social club meeting near the Han River. The KCDC said those patients appear to have contracted the virus during their gatherings at indoor facilities.

At least 12 cases were traced to a church in southern Seoul, according to the city government. Health authorities are conducting virus tests on about 1,700 people who came in contact with the patients.

Korea has seen sporadic cluster infections since it relaxed stricter social distancing on May 6. The greater Seoul area accounted for most of the newly added cases this month.

Health officials warned that they may consider expanding tougher infection preventive measures — currently in place only in the Seoul metropolitan area — across the country if virus situations get worse.

Starting next month, health authorities will adopt a reservation system to limit the number of visitors to nursing homes and facilities as senior citizens are susceptible to virus infections.

The country is also struggling to stem cases coming in from overseas. Twelve additional imported cases were reported, with the number of such cases rising to 1,508.

Recently, a cluster of infections on a Russian cargo ship at a port in the southeastern city of Busan, the country's second-largest city, was reported, and cases traced to overseas have been on a steady rise.

At least 17 sailors aboard two Russian ships tested positive for Covid-19. Health officials said all 163 people who came in contact with the infected crew members have tested negative.

The government said it has inspected about 490 dormitories for foreign migrants workers as such facilities appear to be "blind spots" in quarantine efforts.

Of them, nearly 170 facilities were found to have failed to thoroughly implement quarantine measures, according to the KCDC. Health authorities said 271 foreign workers have tested positive so far.

Imported cases, once the main source of virus cases here, fell to a single-digit figure early this month after the country strengthened quarantine measures on all international arrivals in April.

But such cases have bounced back to double-digit numbers since mid-June.

The total number of people released from quarantine after full recoveries stood at 11,172, up 198 from the previous day.

Letting down our guard