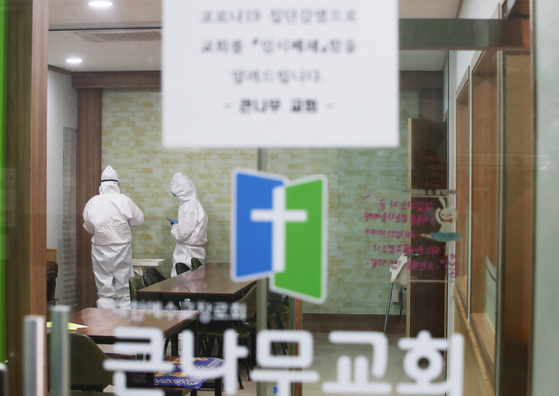 
The Korea Centers for Disease Control and Prevention (KCDC) announced Sunday morning that 55 of the new infections occurred domestically, nearly all of them — 52 — in the capital metropolitan area.

This put Korea’s total case load at 11,776 as of midnight Saturday.

The death toll stood constant at 273 for the fourth day in a row, while 10,552 people were declared fully recovered, up 21 from the previous day.


The weekend saw a marked rise in infections above 50 after case numbers peaked to 79 on April 28 before dipping to 27 on April 31.

The upticks can largely be attributed to cluster infections in connection to a company named Richway in Gwanak District, southern Seoul, table tennis clubs in Yangcheon District, western Seoul, and the Big Tree Church in Yongin, Gyeonggi.

Health officials are concerned the Richway infections — of which 27 have been found so far — in particular could yield further fatalities, as the company primarily markets its products toward the elderly, who are at greater risk to Covid-19.

Richway is known to have run marketing seminars for the elderly, offering health guidelines, introducing them to their products and providing entertainment such as recreational activities as part of what some analysts have labeled as a multi-level marketing scheme. Some customers appeared to have been infected at such events.


Over a dozen infections over the past week, including one on Saturday, were also traced back to a religious meeting between elderly churchgoers at the Big Tree Church in Yongin, the latest in a series of outbreaks in religious congregations.


According to the Seoul metropolitan government, 10 of the new patients reported Sunday acquired the virus at three different table tennis clubs in Yangcheon District after a 52-year-old table tennis aficionado visited all three clubs from May 28 to Wednesday. The man tested positive for the virus on Thursday after apparently infecting 17 people.

A district official said people were likely infected at these clubs due to the close proximity in which they played table tennis, often in doubles.


Authorities continue to urge the public to avoid activities in inadequately ventilated spaces which are proving responsible for a large portion of outbreaks since the initial cluster that emerged from clubgoers in Itaewon last month.

Prompted by the Richway cluster, the government said it is reviewing whether to expand the criteria for facilities with a high risk of infection.

Facilities designated vulnerable to infection, which include noraebang (singing rooms), certain types of bars and establishments that serve alcohol, or fitness centers, are required to have every visitor download a unique application that displays a QR code that is registered at the facility to keep track of patrons.


The system, through which the government hopes to expedite its contact tracing, is due to be implemented starting Wednesday.

But the larger concern for health officials is whether to maintain its current relaxed “everyday life infectious disease control” system or return to the more rigorous social distancing campaign that it relaxed on May 6 after case numbers dipped significantly last month.

If case numbers average more than 50 a day for two weeks, the government may be forced to return to tighter guidelines. As of Sunday, the two week average stands at 44.5.

For parents, this may mean a return to childcare at home. Monday marks the beginning of classes for 5th, 6th and 7th graders, the fourth and last batch of students who will return to school for the first time since the pandemic began.

Since mid-May, Korean students have been returning to classes gradually, and some schools located in or around clusters — some 500 — temporarily shut down again, out of their students may contract Covid-19.

No time to lower our guard

No time to lower our guard (KOR)