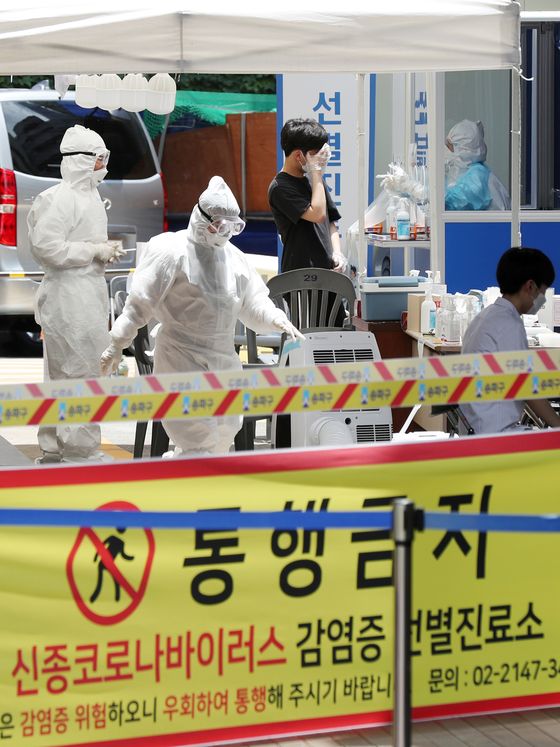 Quarantine officials conduct coronavirus testing on visitors at a makeshift testing facility at a public health center in Songpa District, southern Seoul. A total of 471 students and faculty at a cram school in the area were tested Tuesday after a cook at the school was found with the virus. [NEWS1]


A new cluster of novel coronavirus infections was detected at a military unit in Gwacheon, Gyeonggi, after four officers tested positive on Wednesday.

A major in the Defense Security Support Command (DSSC), a unit under the Ministry of National Defense responsible for internal security in the military, was confirmed infected with the virus on Tuesday. The military subsequently tested a total of 77 people working in the unit.

The tests yielded four new infections by Wednesday, all of them officers in their 30s and 40s who had previously shared a meal with the infected officer.

The infections prompted the military to expand testing to all service members and employees in the DSSC. The nature of work performed by the unit, with many of those service members coming into contact with a large number of people each day, prompted concerns of a wider outbreak.

So far there have been 58 infections in the Korean military, with 17 of those patients currently being treated.

Korean officials reported that 50 new cases had been detected nationwide on Tuesday, a significant uptick from the day before. Seven of those cases were imported from abroad, and 43 cases occurred domestically, according to the Korea Centers for Disease Control and Prevention (KCDC).

That put Korea’s total case load at 11,902. Two more people also succumbed to the disease, putting the total number of Covid-19 fatalities at 276. 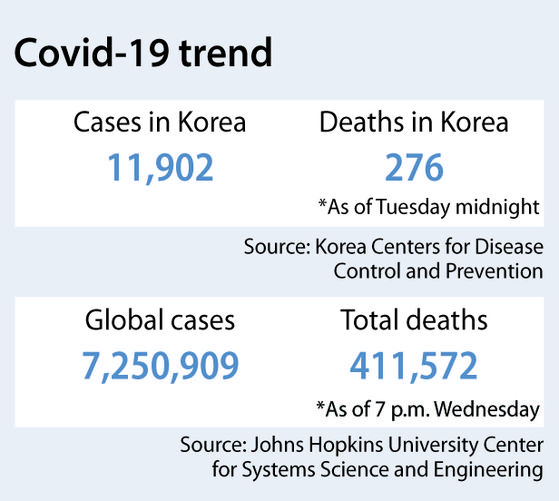 Seoul city officials noted that the city's seven-day average number of new infections recently reached an all-time high since the virus first landed on Korean shores in January. As of Monday, Seoul had an average of 19.3 new cases per day during the past week.

Korea Centers for Disease Control and Prevention (KCDC) Director Jung Eun-kyeong warned in a daily press briefing Wednesday that the recent series of cluster infections around the capital threatens to grow into another mass outbreak if they are not controlled.

“The incubation period for Covid-19 is as short as four days, and when one patient is found it takes around three days before a new patient emerges,” Jung said. “If we cannot trace and quarantine the initial patient’s contacts within this period, secondary and tertiary infections are bound to occur.”

Health officials say they've identified a total of 93 infections linked to a hotspot at the Richway health care company in Gwanak District, southern Seoul, including four new cases as of Wednesday.

Richway, which some media outlets described as a multi-level marketing scheme, is known to have run marketing seminars for the elderly, offering health tips, introducing them to products and providing entertainment such as recreational activities.

Customers who apparently contracted the virus at those events spread it to a church in Seoul’s Chinatown and to an investment company call center in Gangseo District, western Seoul.

Health authorities were alarmed after a man in his 20s who cooked meals for students at a cram school in Songpa District, southern Seoul tested positive after visiting the table tennis center, leading to testing for all 472 students and faculty at the school. Luckily, all tests came back negative.

Urging people to cease work immediately and receive testing if they feel any symptoms of the virus, the KCDC chief stressed the Covid-19 situation globally was taking a turn for the worse and would likely persist over an extended period of time.

“Until a vaccine is implemented, we cannot declare an end to Covid-19 within the short term,” Jung added. “Until a fundamental solution like a vaccine is prepared, the goal of quarantine authorities is to suppress the rate of infections and the size of outbreaks to a level our health and social systems can manage.”

No time to lower our guard (KOR)

No time to lower our guard