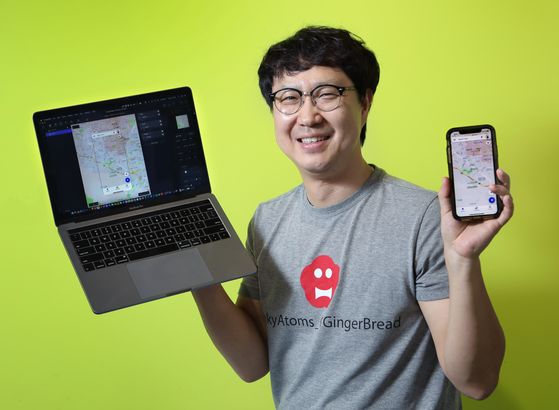 Tony Kim, co-founder and CEO of ProtoPie, holds a laptop and smartphone featuring the ProtoPie program on June 23 in the company's office in Gangnam District, southern Seoul. [PARK SANG-MOON]


Prototyping — the process in which a test version of a concept is created before commercialization — has never been more important. New digital products are being developed rapid fire, and a working sample is needed before anything else can happen.

But the process is not easy, as the disconnect between user-interface designers and programmers is wider than ever. It is often difficult for the vision to be turned into a functioning reality.

That is where ProtoPie comes in. The system, developed with funding from Posco Capital, Kolon Investment and Shinhan Investment, allows for the creation of a user interface without worrying about coding. The design tool interprets the art boards and generates code.

The Korea JoongAng Daily sat down with Kim to discuss the path that ProtoPie has taken and its future direction.

Q. To start off, people might not be accustomed to the exact meaning of prototyping and why it matters in the industry. Please explain the term and its significance.

A. Prototyping is a method to validate product ideas before the implementation process. It became popular for tech industries because the process could help avoid user-interface design flaws down the line which might cost you more time and money to fix later. According to the 2017 Design in Tech report by John Maeda, over 40 percent of startups fail because of product-market fit. Prototyping helps companies including startups to save engineering resources and time.

Then, what sets ProtoPie apart from other prototyping tools?

ProtoPie is a code-free prototyping tool, so designers can build product-like interactive prototypes without knowledge of coding. There are other tools out there like Framer. But you must learn code. Then, there are other sets of products, such as Principle, that are easy to use, but provide limited sources for making more sophisticated designs. I wanted to take the advantages of the existing toolkit while eliminating the weak points. ProtoPie can also utilize sensors and build prototypes running across devices and operating systems including Mac, Windows and Android. Nowadays, the product ecosystem is more important than product itself. Imagine the Uber app. In their ecosystem, different apps for each stakeholder exist; Uber driver app, passenger app, and management system. ProtoPie can help to prototype all interactions across those digital devices.

How did your experience as a Google designer affect the development of ProtoPie?

At Google, designers work under high time pressure and wear multiple hats. It is common for one designer to handle multiple projects at a time as I did in the position between 2010 and 2014. This is why efficient and easy prototyping tools are critical for designers. But as I mentioned before, the existing tools at the time didn't fully fulfill the needs.

Many Korean start-ups struggle to go global. But ProtoPie has the majority of revenues coming from outside of Korea. How was it made possible?

We targeted the global market rather than a specific country from the beginning. Our first customer came from Vietnam when we had just commercialized ProtoPie in 2017. Big companies like Google and Apple first approached us before we promoted our product. This year, we targeted North America and are going to run various marketing campaigns. Over 80 percent of revenue comes from outside of Korea, and the United States is the top market at 45 percent. Besides the United States, the European region is the second largest, with Germany and U.K having great shares. In total, we now serve 15,000 enterprises from 100 countries, alongside individual customers.

Is ProtoPie mainly used for designing an app or are there other use cases?

Some designers are using the tool for apps but others come from home appliance makers or automotive sector. We released functions tailored for the automotive industry so that designers could preview the final result of display interface in cars. Recently, we signed a contract with a major German automobile company, although we are not allowed to reveal the name. We're going to expand to other specific industries depending on market needs; like home appliances and Internet of Things.

Are there any new features that you want to add on ProtoPie?

We're focusing on the prototyping area to win this market. We keep pushing new features to improve expressiveness and collaboration features to fill the gap between designers and engineers.

Google adds up its contributions to Korea