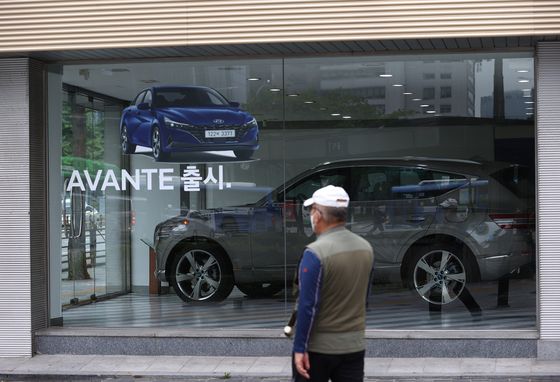 A Hyundai Motor store in downtown Seoul on Monday. Starting Wednesday, the individual consumption tax cut will be extended until the end of this year. However, the tax rate is only lowered by 30 percent, compared to 70 percent between March and June. [YONHAP]


The break on the individual consumption tax for the purchase of automobiles isn't ending, but it is being reduced and will run through the end of the year.

Other measures being rolled out to prop up an economy that has been slowed by the coronavirus outbreak and help those in need include a slashing of the value-added tax for smaller business and the extension of the unemployment insurance program to artists.

The consumption tax on automobiles has been adjusted frequently in recent years as the economy started to slow and then ground to a halt this year during the pandemic. From July 2018 to the end of 2019, the rate was reduced to 3 percent from the normal 5 percent. It was taken back to 5 percent through March, when it was reduced to 1.5 percent as the Covid-19 outbreak took its toll on the economy and the auto sector, one of the major industries in the country, was imperiled.

As of July 1, the rate will be taken to 3 percent again through the end of the year. The discount had been capped at 1 million won ($830) previously, but that cap has been removed. There is now no limit to the benefit.

The government claims that the individual consumption tax has played a significant role in boosting vehicles sales.

According to the Ministry of Trade, Industry and Energy, in the first five months of the year, overseas sales for the five Korean automakers — Hyundai Motor, Kia Motors, GM Korea, Renault Samsung Motors and SsangYong Motor — dropped 27.8 percent on year, with the May numbers alone down 47.8 percent.

“We will ease the burden in purchasing new vehicles, which could be immediately executed without having to go through legislative reforms,” Finance Minister Hong Nam-ki said on June 1 when announcing the government’s plan for economic policy in the second half of the year.

During the press briefing earlier this month, Hong emphasized the need to boost the domestic market to keep the economy growing.

“Considering both the external and internal situation, we’re not excluding the possibility of negative growth this year,” Hong said.

The government is projecting 0.1 percent growth for 2020 if all of its policies and the supplementary budgets are executed swiftly.

Also starting in July, the value-added tax for small businesses with annual revenue of less than 80 million won will be cut through the end of the year. It will be taken down from the normal 10 percent to a range of 0.5 to 3 percent.

Some products will be excluded, such as alcoholic beverages, as well as some services, such a property brokerage.

The tax cut is to reduce the burden on small private businesses, such as restaurant and convenience stores, which have been affected heavily from the social distancing due to the coronavirus pandemic.

In the second half, the social safety net will be expanded for those considered vulnerable but not covered. Starting Dec. 10, artists will be allowed to subscribe to employment insurance, which qualifies them for unemployment benefits and maternal leave pay.

The maximum loan for low-income labor workers granted by the Korea Workers’ Compensation and Welfare Service for living expenses will be raised from 20 million won per person to 30 million won. The interest rate on the loans is set at 1.5 percent.

This increase in the maximum loan limit, however, is only temporary and will last only through the end of the year.

Some new measures introduced by the government deal with non-economic issues.

Starting in the second half of the year, anyone who is found selling and profiting from the sale of child pornography will be sentenced to a minimum of five years in prison. Those distributing the materials will face minimum three years in prison, even if they made no monetary gains from the transactions. Even those who own such materials without distributing or selling them will face a minimum of one year in prison.

Currently, those that own such materials face a maximum prison term of 10 years. However, in many cases, they ended up only paying fines.

The "Nth room" case, where a group of men manipulated and forced underage girls to perform sexual acts, raised the awareness of such crimes earlier this year.

Spending pulls out of its pandemic slump