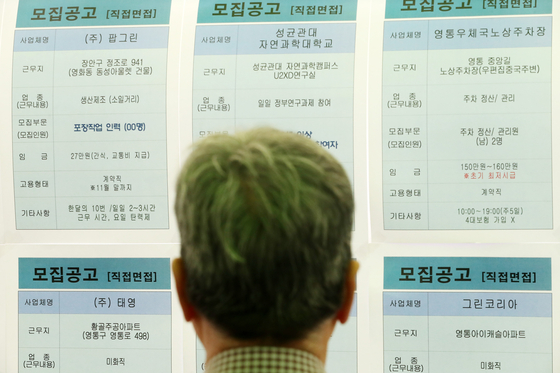 A senior citizen looks at job postings in Suwon, Gyeonggi, in October 2019. [NEWS1]


With a population that is shrinking as it grows older, Korea's government is considering a range of policies to maintain its workforce, including raising the eligible age to receive benefits provided to elderly people.

Those benefits include discounts on public transit; tickets for KTX rides, domestic flights and ships; fee waivers for museums, galleries and palaces; discounts on phone bills; and a basic pension of up to 300,000 won ($250) per month.

During a government meeting Thursday, Finance Minister Hong Nam-ki said a task force will be formed to make adjustments to some of those benefits.

While the government did not provide details on how much they will raise the age of eligibility from its current level of 65 years, there has been growing speculation that it could be raised to 70 or older.

The discussion was part of a government meeting to lay out a blueprint for its population-related policies.

With the population shrinking and aging, the government through its task force plans to create policies that would help increase the number of people that would actively engage in the economy, including elderly residents.

The government also plans to ease regulations on dual nationality to grow its pool of foreign talent.

Currently, foreigners are required to give up their original nationality within a year of being granted Korean citizenship. The only exception is for a foreigner who applies as a "talent," in which case dual nationality is allowed under the condition that they do not exercise their foreign nationality.

The government starting next month plans to expand that category to 10 areas, including high-profile personnel, corporate workers, holders of source technology and intellectual property and those with experience in international organizations.

The government is also planning to implement a program that would allow foreign students in engineering and science to work at Korean small businesses, by allow their student visas to be converted to E-9.

The program is slated to be adopted in the second half of 2022.

The government meeting also included a discussion of creating statistics to identify young people who have given up on the job market.

This data would be used to get a better picture of the status of youth employment and to create programs to encourage those young people to search for jobs with local community centers.

Pregnant women would be able to take maternity leave much earlier. The leave is currently limited to 44 days prior to the date of giving birth.

Parents of young children, including toddlers, may also receive more flexible leave from work to raise their children.

The government says it hopes the changes would allow more women to remain at work rather than giving up on their careers to raise a family.

Another report by Statistics Korea showed the continuing decline of newborns, while the number of deaths increased, resulting in an accelerating decline in the national population.

With its overall population shrinking, so are the number of people actively engaged in the economy, which could further hurt the nation’s potential growth.

“The demographic change is faster than anticipated, and a full-fledged countermeasure from the national level is no longer a choice but mandatory,” Finance Minister Hong said. “The government will push on with core projects that will minimize the [declining] population impacts while enhancing economic and social adaptations.”

He said the government will redesign industry and financial systems to counter the aging society.

“We will create supports to expand elderly-friendly industries, as well as a standardized road map of products and services for seniors next year.”