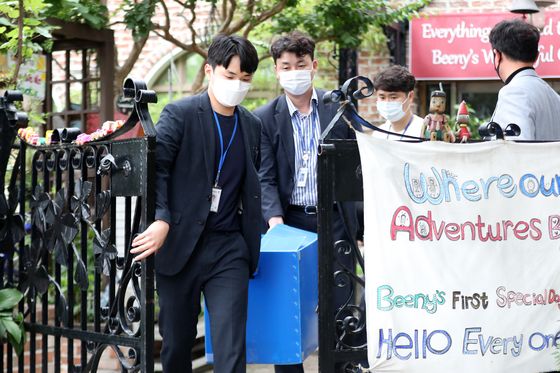 Police officers on Monday morning carry out boxes after raiding a kindergarten in Ansan, Gyeonggi, where a mass outbreak of food poisoning resulted in children hospitalized with the so-called hamburger disease. [NEWS1]

Police on Monday morning raided a kindergarten in Ansan, Gyeonggi, confiscating documents and CCTV footage after a large outbreak of E. coli there hospitalized dozens of children earlier this month.

The police search came one day after a group of parents sued the kindergarten director for negligence of duties and violating the food sanitation law. The complaint accuses the director of intentionally destroying evidence by getting rid of food supplies that could have helped trace the source of contamination.

Five police officers searched the kindergarten 10:20 a.m. without an arrest warrant but with consent from the director. They secured 32 documents and CCTV recordings.

The first symptoms of food poisoning in the kindergarten were reported on June 12. As more kids fell ill, the school notified local health authorities of the situation on June 16.

The Korea Centers for Disease Control and Prevention (KCDC) said in a briefing Monday that 114 kindergarteners and their family members showed symptoms of enterohemorrhagic E. coli, a strain of the bacteria that can cause severe intestinal infections.

A total of 58 people, including the director, tested positive for enterohemorrhagic E. coli, which can cause hemolytic-uremic syndrome (HUS), or the so-called hamburger disease. The syndrome can cause acute kidney failure and death.

A total of 21 patients are still hospitalized, including 19 children and two family members. Of these patients, 16 have symptoms of hemolytic-uremic syndrome. Four young patients are receiving kidney dialysis.

The kindergarten director has come under fire for allegedly failing to follow standard food sanitation procedures. The school did not store food ingredients used to prepare the children's lunch and snacks for 144 hours, as required by regulations. The storage rule would have allowed health officials to more easily trace the source of the contamination.

The kindergarten is accused of improperly storing six lunch and snack ingredients, including tteokbokki, or Korean-style rice cakes, braised burdock and dumplings, between June 10-15.

The cause of the contamination is still unknown.

Parents expressed outrage that the kindergarten was delayed in informing them of a serious food poisoning outbreak. They were also angered by the kindergarten's possible destruction of food ingredients which could have helped trace the contamination source and concerned that children diagnosed with HUS could have permanent damage to their health.

The director apologized to the parents and said the school was unaware of the storage regulations when it threw away the food ingredients.

Police have also been criticized for being too slow to investigate the kindergarten as more children became ill. Police are expected to summon the director for questioning soon.

Lee said in an interview that “it is problematic to intentionally scrap” the food meant to be stored, “but legally it is difficult to see snacks as being a problem.”

Are 'coronavirus criminals' worth chasing down?

Moderna and IAVI to cooperate on developing vaccines