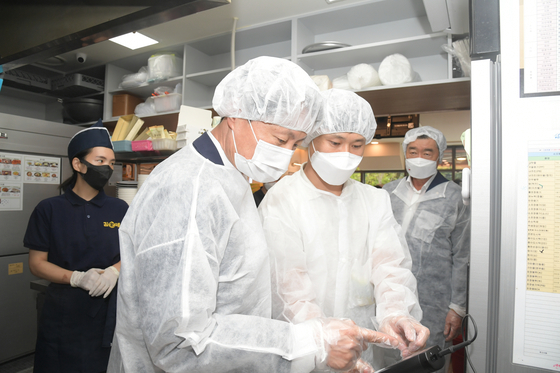 Minister of Food and Drug Safety Kim Kang-lib, performs a sanitation check at a gimbap restaurant in Gyeonggi on Aug. 13 after reports of food poisoning. [YONHAP]


More than 130 people sued a chain of gimbap (seaweed rice rolls) restaurants for getting them sick.

A group of 135 individuals who allegedly got food poisoning after dining at two Manyeo Gimbap restaurants in Seongnam, Gyeonggi, in late July and early August, filed a class-action lawsuit against the franchise headquarters and the owners of the two stores.

The suit was filed by Park Young-saeng, an attorney at the Jungjin law firm, on Monday at the Suwon District Court's Seongnam branch.

In the suit, the plaintiffs asked for financial compensation of around 400 million won ($345,098), or 3 million won per person from the franchise and store owners.

"If the court can see causality between the food poisoning incidents and health authorities' findings at the two gimbap restaurants, we will have a good outcome," said the attorney in a statement.

A total of 276 people who ate gimbap at the two restaurants in Seongnam on July 29 and Aug. 5 complained of food poisoning symptoms including stomachaches, high fevers and diarrhea. Some 40 of them were hospitalized, and about half tested positive for salmonella.

Salmonella outbreaks in gimbap restaurants occur frequently in the summertime.

On Aug. 23, 34 people displayed symptoms of food poisoning after eating at another gimbap restaurant in Goyang, Gyeonggi.

A 25-year-old woman died on Aug. 25, two days after eating gimbap at the restaurant in Goyang. Her husband said she suffered from severe vomiting and high fever. She went to an emergency room early on Aug. 25, but died later that day after returning home from the hospital.

Another 27 people who ate gimbap at a restaurant in Paju, Gyeonggi, suffered from food poisoning as well, according to Paju City Office on Aug. 27.

A Ministry of Food and Drug Safety official said, "Gimbap restaurants need to be especially careful of food poisoning outbreaks during hot and humid summers as many restaurants use eggs which can contain salmonella bacteria. To all restaurant workers, we strongly advise that you pay extra attention to sanitation."

A total of 1,101 patients were admitted to hospitals because of salmonella infections this year, including 598 patients in June and July, according to a Korea Disease Control and Prevention Agency report in early August.

Cost of gimbap breaks ￦3,000 as prices continue to rise