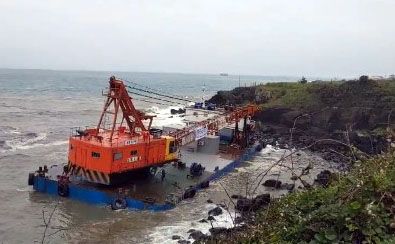 A 429-ton barge docked in Jeju was pushed out to sea Monday afternoon due to heavy winds on the island. [YONHAP]

A total of 206 millimeters of rain had fallen on Gangneung, Gangwon, as of Tuesday at 3 p.m., the KMA said, marking the most intense 24-hour rainfall since 1953 when 160.4 millimeters fell in the area.

Rainfall in nearby Sokcho also topped the charts, as well as in the Mount Seorak region, which recorded around 250 millimeters of rainfall.

“Heavy rains were concentrated for over 12 hours [in the area] because of geographic effects caused by easterly winds hitting the Taebaek mountain range and forming strong rain clouds,” a KMA official said.

The region is expected to receive further rainfall that may reach over 300 millimeters of cumulative precipitation by Wednesday morning, KMA officials added.

The southern island of Jeju also recorded more than 200 millimeters of rainfall, as well as heavy winds that caused 10 flights to be cancelled Monday evening. Intense winds reaching up to 30 meters per second caused a 429 ton barge docked in Jeju harbor to be pushed out to sea after a rope connected to an anchor broke on Monday afternoon. Two sailors aboard the ship were rescued by the Coast Guard.

Officials with the Central Disaster and Safety Countermeasures Headquarters said 36 cases of property damage had been reported across the country as a result of the storms. There were no reported injuries, they said.

Seoul and Gyeonggi also received the heaviest rainfall this year at between 60 to 100 millimeters, accompanied by heavy winds. Busan was hit with around 140 millimeters of rain.

The KMA officially lifted its heavy wind advisory in Jeju and on the southern coast at 6 p.m. Tuesday, but storm alerts remained active for the eastern coast.

The downpour on Monday and Tuesday marked the first intense rains of the monsoon season this year, which typically last from late June through July. The peninsula usually receives around 30 percent of its rainfall for the entire year during that time.

No more rain is expected for the rest of the week, with daytime temperatures expected to climb over 30 degrees Celsius. Rain may continue next week across the country, the KMA said.

Visa-free tourists being allowed back to Jeju, Yangyang