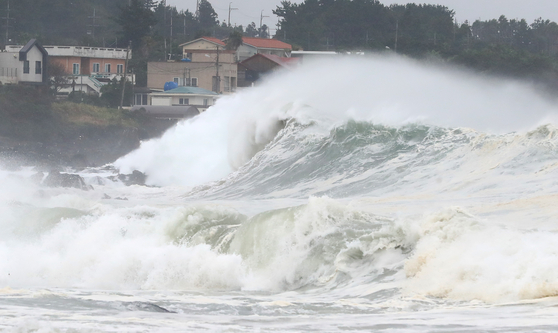 Fierce waves batter the coast of Jeju at Seogwipo on Wednesday, as Typhoon Maysak makes its way north toward the island before its projected landfall near Busan in the evening. [YONHAP]

The storm — projected to be one of the fiercest to hit the peninsula in years — was moving northwards by Wednesday morning at a speed of 18 kilometers per second (11 miles per second), around 310 kilometers (193 miles) east of Seogwipo, Jeju, according to the Korea Meteorological Administration (KMA).

With wind speeds at its center reaching about 45 meters per second, the typhoon was estimated to make landfall on the southern coast of South Gyeongsang, near Busan, by Wednesday evening, the agency said.

The storm was then forecast to move northward before exiting to the East Sea off the country’s east coast in Gangwon by early Thursday morning. It is forecast to make landfall a second time on North Korea’s South Hamgyong Province that evening.

Predictions from the U.S. Joint Typhoon Warning Center (JTWC) based in Hawaii and the Japan Meteorological Agency showed the storm making landfall on the Korean Peninsula at a more westerly location from the KMA projection, somewhere between South Gyeongsang and South Jeolla.

The storm's wind speeds earned the classification of “very strong” from the KMA, and forced the Korea Airports Corporation to cancel 323 domestic flights nationwide, most of which were scheduled to depart from Jeju on Wednesday.

“The typhoon’s eye will pass inland after making landfall, so there is a high likelihood it will cause damage to human lives and property,” a KMA official said.

“Preparations must be thoroughly made to prevent excessive damage from strong winds and rain around Jeju Island, the eastern provinces and the southern coast.”

South Gyeongsang was buffeted by heavy rains accompanying the storm, with some areas like Hapcheon and Gimhae receiving around 60 millimeters (2.4 inches) of rain per hour. Parts of Jeju received over 300 millimeters of rain throughout Wednesday.

In Yeoncheon, Gyeonggi, far north of the areas in the storm’s direct path, rain clouds stretching from the storm front caused a brief downpour of around 80.5 millimeters on Wednesday morning.

With the storm approaching, Korea was projected to receive even more unwanted rain throughout the week, after one of the longest rainy seasons on record this summer.

The KMA projected Jeju, South Gyeongsang, South Jeolla and eastern Gangwon would receive a further 100 to 300 millimeters of rain by Thursday, while greater Seoul, Chungcheong and North Gyeongsang will likely receive around 100 to 200 millimeters.

Perhaps more alarming is the threat of yet another storm following Maysak. Typhoon Haishen, according to the KMA, was projected to move northwest from its origin point on the Pacific Ocean before making landfall on the the Japanese island of Kyushu by Sunday.

While Haishen's path remains yet unclear, the storm was on track to affect the southern regions of the Korean Peninsula next week, bringing with it more rain and wind.

According to the JTWC, the convergence of the successive storms around Korea was owed to the formation of a high pressure blocking ridge above the East Sea, which is preventing the cyclones from moving east.