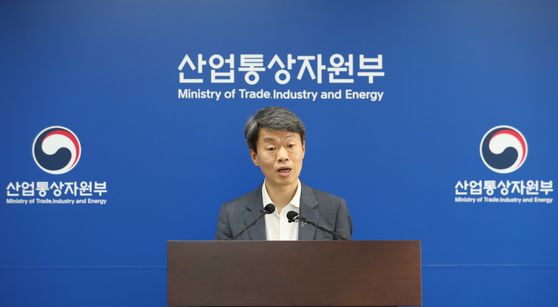 Na Seung-sik, head of the Ministry of Trade, Industry and Energy's international trade and investment department, announces Korea's export performance in June at the ministry's headquarters in Sejong on Wednesday. [YONHAP]


Korea’s exports fell for the fourth consecutive month in June, the third month in a row in which the decline was at double-digit rates in percentage terms.

The rate of the decline has eased compared to the two previous months, where exports fell more than 20 percent, indicating that the situation is stabilizing. China's economic recovery has helped to temper the fall.

According to the Ministry of Trade, Industry and Energy on Wednesday, exports in June fell 10.9 percent compared to the same month the previous year to $39.2 billion.

Imports fell 11.4 percent on year to $35.6 billion, contributing to a $3.67 billion trade surplus. The trade balance has been in surplus for two consecutive months.

Semiconductor exports were basically flat, down 0.03 percent on year to $8.2 billion.

Computer exports surged 91.5 percent year-on-year to $1.23 billion as people are being forced to work or study at home due to the pandemic. In May, computer exports rose 82.7 percent to $1.2 billion.

Automobile exports in June fell 33.2 percent to $2.49 billion, compared with a 54.2 percent drop in May. The decline in automobile parts exports also declined, easing from a 66.8 percent decline to a 45 percent decline.

Mobile telecommunications device exports including smartphones, which was also affected by the coronavirus, fell 11.6 percent in June to $1 billion, an improvement from the 22.2 percent decline the previous month.


“In the case of China, they have already reopened their economy, and it seems [Korea’s exports] have been influenced accordingly,” said Na Seung-sik, head of the Trade Ministry’s international trade and investment department when asked if the easing of the coronavirus outbreak in China contributed to the increase of Korean exports.


The Trade Ministry official also cited the two additional working days in the month for the lower decline of exports in June.

Exports to neighboring China grew 9.5 percent to $114.2 billion. This is a turnaround from the 2.4 percent decline in the previous month. China is Korea’s largest export market.

These numbers were improvements over those in May. U.S. exports in May fell 29.2 percent that month, while to the European Union tumbled 22.5 percent. Asean exports in the same month dropped 30 percent.

The ministry official cautioned against optimism.

“It’s not easy to predict as July’s exports will depend on whether the novel coronavirus infection situation stabilizes,” Na said.

While new cases continue to be reported in Korea, the situation is seen as being under control.

The rising number is forcing several states to return to lockdown, which may tax Korean exports.

Expectations were high earlier this year when the number grew year-on-year in February, breaking a decline that lasted 14 consecutive months.

When asked about any contact from Japan on the World Trade Organization (WTO) complaint over Japan’s tighter export control implemented a year ago, Na said there was nothing to report.

“We will continue with the WTO complaint as planned,” he said. “However, we hope Japan would engage in continuing dialogue and communication.”