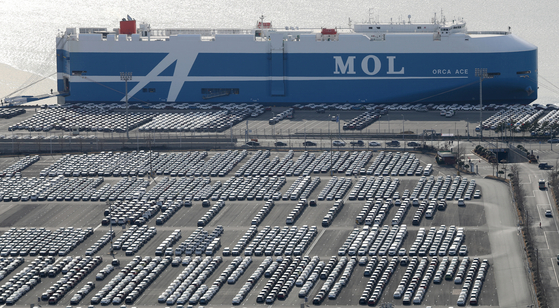 Hyundai Motor vehicles parked in April ahead of being shipped overseas. Automobile exports declined by 4.2 percent in July, but that is an improvement over the double-digit drops May and June. [YONHAP]

Another set of economic indicators has been released showing that the worst may be over and the economy could bounce back in the third quarter.


While exports in July fell, they only declined in the single-digit range, breaking a long streak of double-digit drops.


According to the Ministry of Trade, Industry and Energy on Saturday, exports last month fell 7 percent to $42.8 billion.


This comes after a minus 25.5 percent reading in April, negative 23.6 percent in May and a 10.9 percent decline in June.


Exports to the U.S. were particularly strong last month, up 7.7 percent.


Automobile exports to the U.S. grew 14.2 percent, while exports of semiconductors were up 83.6 percent.


Exports to China continued to grow, but at a slower pace. They were up 2.5 percent in July, compared with a 9.6 percent rise in June.


The ministry said automobile and computer exports to Europe helped slow the decline. Automobile exports to that market fell 10.4 percent in July, compared with a 13.1 percent drop in June.


Overall, exports of autos were down 4.2 percent, while exports of semiconductors rose 5.6 percent.


"Exports have been steadily improving since the full impact of Covid-19 started in April," Minister of Trade, Industry and Energy Sung Yun-mo said. "A single digit [decline] in July is meaningful."


With China, the U.S. and the EU taking half of Korea's exports, the July report was seen as hopeful.


"While one needs to be cautious in making a hasty conclusion, July's report is a positive signal," Sung added.


The relatively good export reading came just a day after Korea reported that industrial output, consumption and corporate investment were strong in June. President Moon Jae-in has said he is hoping for a rebound in the third quarter.