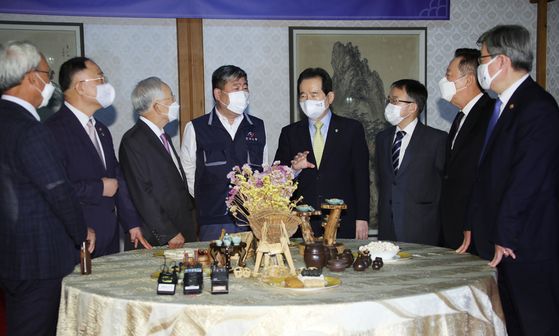 Representatives of the government, labor unions and business management including host Prime Minister Chung Sye-kyun, fourth from right, converse at the prime minster's residence in Seoul on Wednesday ahead of a signing ceremony on labor cooperation. The ceremony was canceled as one of the umbrella labor unions pulled out at the last minute. [YONHAP]


Representatives from business management and labor unions each made their proposals for next year’s minimum wage, officially kicking off the annual negotiations.

The two sides once again presented starkly different proposals, with both parties arguing that the economic impact of the coronavirus pandemic supports their argument.

On Wednesday the business representative proposed cutting the minimum wage for next year 2.1 percent to 8,410 won ($7) per hour. The labor counterpart suggested a 16.4 percent increase to 10,000 won, the level promised by President Moon Jae-in during his presidential campaign.

During the fourth minimum wage council meeting, held at the government complex in Seoul since last month, the business communities argued that the minimum wage should be cut this year as many small- and medium-sized businesses as well as mom-and-pop stores including restaurants are struggling due to the coronavirus outbreak.

“Small businesses especially have been suffering as the coronavirus has added to the struggles that these businesses have suffered due to the excessive increase in the minimum wage over the last three years.”

The labor union argued that the minimum wage should be raised to 10,000 won to reduce the income disparity and stabilize the livelihood of low-income workers.

It argued that 10,000 won was the appropriate level that would support the minimum living expenses of a low-income worker living alone.

“The livelihood of a low-income worker suffering from the coronavirus doesn’t improve with only raising several won” said Lee Dong-ho, labor representative and secretary general of the Federation of Korean Trade Unions.

He said the actual increase of wages will be lowered next year due to a 2018 legislative reform that will include regular bonuses and welfare payments in the minimum wage, to be applied starting next year.

“Even during the IMF foreign exchange crisis and the financial crisis [2008-2009], the minimum wage was raised at least 2 percent,” Lee said.

Meanwhile a signing ceremony between the government, business representatives and labor unions agreeing to cooperate in combating the coronavirus pandemic was canceled as one of the umbrella labor unions, the Korean Confederation of Trade Unions, pulled out at the last minute due to internal disagreement.

The three parties, hosted by Prime Minister Chung Sye-kyun, were to hold a signing ceremony to include businesses promising to work to keep jobs while the labor union refrains from raising the minimum wage.

If the agreement was signed it would have been the first trilateral agreement in 22 years.

The labor union has walked out of the trilateral meeting since 1998, when the country was faced with its first major economic crisis.

The review on the minimum wage has already passed its legal deadline of June 29.

However, there is roughly a month until the parties have to agree on next year’s minimum wage before the figure is publicly announced on Aug. 5.

Coupang to strike back against workers' protests for summer cooling essentials