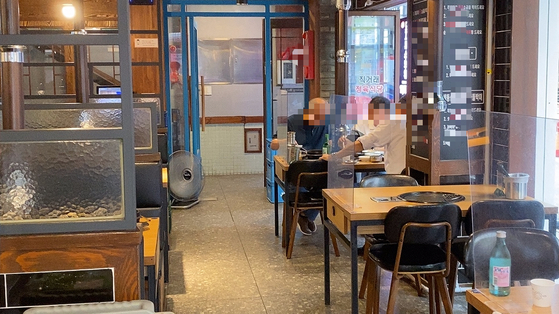 The Minimum Wage Committee announced Tuesday that next year’s minimum wage will be set at 9,160 won ($7.97) per hour, up 5.1 percent. Many businesses are expressing concerns.

“I told my part-time workers that they don’t have to work for the next two weeks,” said Yoo Sang-hoon, a 66-year-old who owns a restaurant in Gwanak District, southern Seoul. “It was an inevitable choice – customers coming in for lunch halved due to Level 4 social distancing measures, and it was announced that the minimum wage will rise.”

For Yoo and others, the minimum wage increase comes at the worst of times.

Restaurant and cafe owners have fewer customers amid strict social distancing restrictions as the number of Covid-19 infections surges to record levels. Yoo took a 30-million-won loan from a bank three months ago – just to pay off a loan he owned to another bank. Taking multiple loans or even being denied of loans by banks is common these days, according to Yoo.

“Seeing they raised minimum wage in such situations makes me both angry and depressed,” said Yoo. “I’m going to dismiss all part-timers and try to run the restaurant with my wife.”

The restaurant owner expressed dissatisfaction towards hardline labor groups requesting higher base pay. Labor’s final offer for the minimum wage was 10,000 won, which would have been a 14.7 percent increase.

“The labor groups still get a monthly salary even if they go out to the streets to protest,” said Yoo. “Small store owners like us don’t get anything.”

The situation is no different for factory owners and small- and mid-sized companies (SMEs).

“I couldn’t sleep after hearing news about the increased minimum wage,” said Han Ki-chul, a 70 year-old managing a Daegu-based textile factory with 90 employees. “If the minimum wage goes up, salary and severance pay also rises. My debt is rising as I experience 100 to 200 million won in losses per month, and I’ve been wondering if this is the time to shut down.” 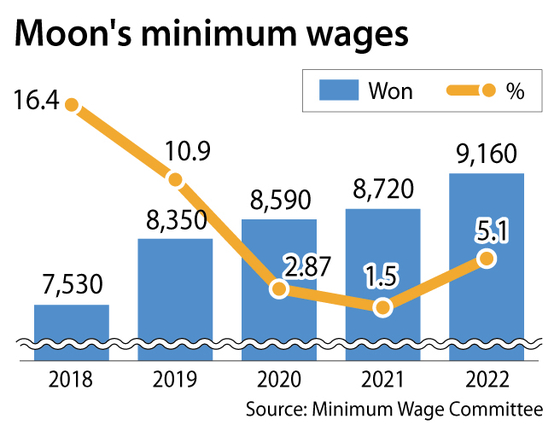 Han says his factory has been getting sizable orders from companies in the Middle East, but it is struggling to complete them due to the 52-hour workweek mandate limiting working hours. Labor costs will snowball if he employs more workers amid the higher minimum wage.

“Orders from local companies are decreasing due to the pandemic, and higher ocean freight rates make it hard to earn profits,” said Han. “What can I do when the government raises the minimum wage while neglecting the difficult situation of companies? The only thing SME owners talk about these days is when we should close business.”

SMEs and business representatives have been requesting the minimum wage to remain unchanged or at least under 9,000 won. Their final offer submitted to the Minimum Wage Committee on Tuesday was 8,850 won, up 1.49 percent, but their requests were not accepted.

“The 6.6 million SMEs are the biggest support system behind Korea's economy, but opinions of those SMEs are taken too lightly,” said Lee Eui-hyun, president of the Korea Metal Industry Cooperative. “SMEs are going to suffer from rising minimum wages, and a considerable number of workers may lose their jobs.”

Business lobbying groups say companies won’t be able to bear the new minimum wage, and workers will be laid off. According to Korea Federation of SMEs (KBIZ), 300,000 jobs disappeared in 2020 due to the minimum wage increase and the pandemic. According to their survey of 600 SMEs, 40 percent of the firms say even this year’s minimum wage of 8,720 won is difficult enough. A total of 47.8 percent replied that they are operating business by depending on loans.

“SMEs are very troubled at the moment,” said a spokesperson for KBIZ. “We’re afraid that more jobs will disappear next year.”

KBIZ says that increase in labor costs will take a toll on the employers more than expected. A higher minimum wage pulls up statutory leisure pay, severance pay and costs for four social insurance programs. On top of 5.1 percent increase in minimum wage, other costs increase total labor costs by 33 percent on average.

Following the announcement of the new minimum wage, KBIZ released a statement expressing concern that many employees could lose jobs and requested countermeasures to help SMEs. According to the lobbying group, small firms with fewer than 30 employees – where 83 percent of Korea's minimum pay employees work – will be hit the hardest.

“The government needs to promptly provide support measures such as increasing subsidies in order to prevent the minimum wage increases from negatively affecting the overall economy,” said a spokesperson for Korcham.