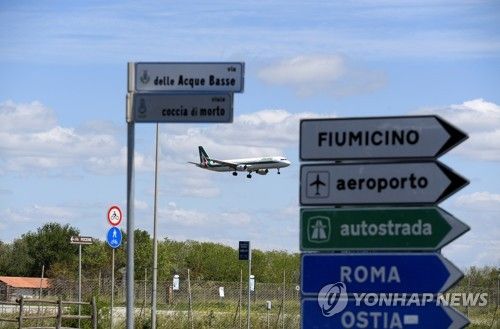 In this May 3 file photo, a plane lands at the Fiumicino airport, in Rome, Italy. [REUTERS/YONHAP]


Koreans and Korean residents may be able to start flying to parts of Europe for non-essential travel as of July 1, following the European Union Council’s recommendation to its member countries on Tuesday.

The non-binding recommendation that EU member states begin lifting travel restrictions at their borders applies to foreign travelers from a number of countries, including Algeria, Australia, Canada, Japan, Morocco, Serbia, Korea and China.

Non-essential travel from Korea to some 20 EU member states had been banned since March due to the Covid-19 outbreak. Business and diplomatic trips are considered essential travel.

Despite the council’s recommendation, it will be up to each member state to decide whether to open up their borders to the countries on the list, and whether to impose a time period of self-quarantine for arrivals.

“It is up to the Member States to define the conditions for non-essential travels,” Michael Reiterer, the EU ambassador to Korea, told the Korea JoongAng Daily Wednesday.

Sweden’s borders, for instance, will remain closed until July 7.

“The Swedish borders are closed until 7 July,” said Marianne Bylund, first secretary of the Embassy of Sweden in Korea. “That decision was taken by the Swedish government on June 25. Still only Swedish citizens and foreign citizens who return home [to Sweden] can enter. No quarantine.”

Koreans who travel to Italy for non-essential travel, meanwhile, will be required to undergo a 14-day self-quarantine upon their arrival, according to the Italian Embassy in Korea.

Some countries like Denmark have defined what they accept as essential travel into the country.

Residents of countries other than EU Member States, Schengen countries and the United Kingdom are banned from entering Denmark unless their travels meet the country's definition of essential travel, which includes having a job based in Denmark, attending a business meeting in Denmark, going to school in Denmark or being a partner or parent of a resident in Denmark, according to the Danish Police.

Koreans who travel to EU member states will be tested upon their return to Korea and will be required to undergo a two-week self-quarantine period at home.

Foreign nationals who are traveling from Europe for short-term non-essential travel to Korea will also be tested upon arrival at the Incheon International Airport and will be required to quarantine for two weeks at a facility run by health authorities.

Foreign nationals traveling from Europe for a longer stay in Korea will also be tested and asked to undergo a two-week quarantine period, but not necessarily at a public facility.

All inbound travelers from abroad will be asked to download a mobile application upon their arrival, through which they must communicate daily with health authorities to report their conditions over the two-week period. Those without devices that can use the mobile app will be asked to provide their contact information in Korea.

The EU travel recommendation is valid for two weeks, after which the council will provide another update on the issue.

Europe had reported nearly 2.5 million cases of Covid-19 infections as of Tuesday, according to the European Centre for Disease Prevention and Control. The top five European countries with the highest total infections were Russia, with over 640,000 cases, the UK, with nearly 312,000 cases, followed by Spain, Italy and France.

Symposium on Korea and EU to be held Friday