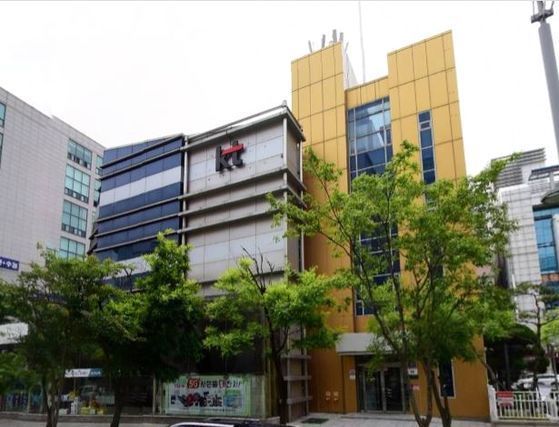 A building in Gonghang-dong, western Seoul, that will be converted into an officetel. The building was originally owned by KT. [NAVER MAP]

The shift has been spurred by the falling profit from renting offices, pushing owners to repurpose buildings into residential units.

The 18-story Woodeok Building in Yeoksam-dong, southern Seoul, is currently closed for refurbishment. A real estate development and construction company bought the building in May and is planning to remodel it into an officetel.

An officetel is a dual-purpose building used for both commercial and residential purposes.

Tourism company Ramid Group is doing the same thing with a 3,159-square-meter (34,003-square-foot) building in Nonhyeon-dong, southern Seoul, which was formally owned by Vision Holdings. After buying the building last February, it is now converting it into an officetel.

Vacancies in commercial buildings are increasing rapidly as more businesses tend to move their offices to Gyeonggi. Recently, Doosan Heavy Industries & Construction and Hyundai Heavy Industries Group have both announced plans to relocate their headquarters to Pangyo, Gyeonggi.

A growing number of employees have also started working from home due to the coronavirus outbreak, increasing the unusually high vacancy rate in commercial areas.

“Less office space is needed these days due to [the adoption] of working from home,” said Cho Hyeon-taek, a researcher at commercial store information provider Sangga Jeongbo Research Center. “Companies tend to reduce the sizes of their offices as well.”

The office building transaction volume has also declined. According to data from ShinYoung Asset, a real estate service firm, transactions came to 4.1 trillion won ($3.4 billion) in the first half of the year, a nearly 40 percent drop compared to same period a year earlier.

Real estate investments, on the other hand, are increasing thanks to all-time low interest rates.

With travel restrictions in place due to the coronavirus pandemic, people who have been purchasing overseas real estate have turned their eyes toward the domestic market.

“There are over 100 asset management companies and real estate investment companies in Korea,” Choi Jae-gyeon, head of research at ShinYoung Asset said. “As they have failed to find stable investment outlets, they are trying to make profit through alternative means.”

During the 2008-09 global financial crisis, many office buildings in Seoul were converted into hotels. At the time, Hallyu, or the Korean Wave, attracted more than 10 million foreign tourists annually to Korea.

The trend is expected to continue well into the second half of this year.

Hyundai Steel recently sold off its office in Jamwon-dong in southern Seoul. Kumkang Kind's office in Seocho-dong. southern Seoul, and Eusu Holdings's office in Yeouido, western Seoul, are both due to be sold in the second half of this year. Those buildings will be converted into either officetels or rented accommodation.

Unlike houses, officetels are not subject to government regulations on presale prices.

“As the supply of apartments in Seoul is showing unstable signs due to the regulation, [people] find officetels attractive because they are good alternatives,” said Choi.

Box office starts to bounce back over the holiday weekend