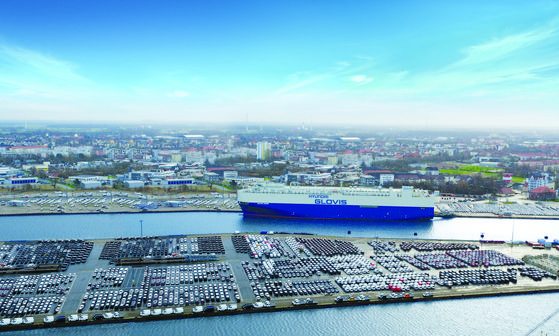 A Hyundai Glovis ship is docked in the port of Bremerhaven in Germany. [HYUNDAI GLOVIS]


Hyundai Glovis has inked a $432.4 million contract with Volkswagen Group’s logistics subsidiary to transport the automaker group’s finished cars from Europe to China.

The logistics unit of Hyundai Motor Group announced Thursday it signed a deal with Volkswagen Konzernlogistik, a logistics subsidiary that offers delivery of production parts and transportation of vehicles, to exclusively transport Volkswagen Group’s finished cars from ports in Germany and England to the main ports of China, including those in Shanghai and Huangpu District in Guangzhou.

Hyundai Glovis said the contract has actually been in effect since Jan. 1, but the announcement was delayed due to negotiations that had to be made internally, according to Kang Sung-gon, a spokesperson for Hyundai Glovis.

The contract ends in December 2024.

Volkswagen, Audi, Porsche and Bentley are some of the brands that fall under Volkswagen Group.

The new contract is the largest shipping deal Hyundai Glovis has secured with an automaker, apart from Hyundai Motor and its sister company Kia Motors, since it initiated vehicle transport business in 2008. The company didn’t reveal the number of cars it is delivering, but said it is transporting vehicles from Europe to China 10 times a month.

Hyundai Glovis said the latest deal will raise the efficiency of the company’s operation globally by adding cargo to routes it often struggles to fill.

Hyundai Glovis “is grateful to Volkswagen Group for regarding highly of our transport capacity,” said a company spokesperson in a statement. “Based on knowledge on the vehicle transport operation, [Hyundai Glovis] plans to provide a high quality transport service.”

As of 2016, 60 percent of the cars that Hyundai Glovis shipped were from Hyundai Motor or Kia Motors. That figure has fallen to 47 percent as of last year, according to the company.

“In the time of Covid-19, the latest deal is very helpful for our performance,” said Kang.