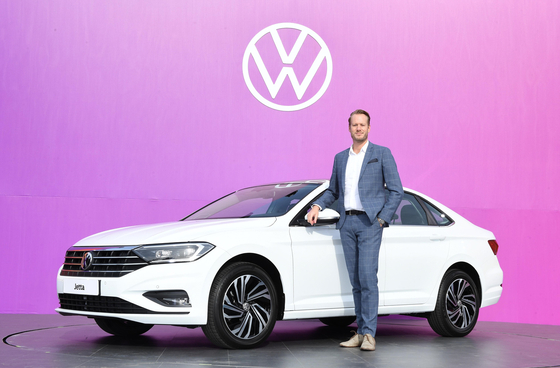 
Volkswagen Korea aims to “popularize” import cars for local consumers by selling them for less, starting with its latest Jetta sedan.

The compact Jetta sedan is available to be ordered starting Thursday. Introduced in 1979, the model is a steady seller at Volkswagen and the latest release is in its seventh generation. In Korea alone, more than 170,000 Jetta sedans were sold since Volkswagen Korea was established in 2005.

The official price tag for the 2020 Jetta is 27.5 million won ($24,000) for the premium model and 29.9 million won for the prestige model, which comes with upgraded options like a camera on the back and heated back seats. With the support of Volkswagen’s final service program, the premium Jetta’s price can be cut to as low as 23.3 million won, including tax.

For a foreign car brand in Korea, a price in the 20-million-won range is extremely rare. Comparing compact sedans from other German brands, the price range is typically in the 30-to-40-million won range. The seventh-generation Jetta is 4 to 7 million won cheaper than its previous model, despite being longer and wider.

Volkswagen Korea also extended the warranty to five years and 150,000 kilometers (93,200 miles) and offers a three-year “Service Plus” program during which Volkswagen exchanges auto parts for free.

“The 'democratization of the imported car market' is our mission,” said Stefen Krapp, Volkswagen Korea’s head, during a promotional event Thursday in eastern Seoul. “There are still plenty of Korean customers having little or no opportunity to own or even experience an import car at all. This, we want to change."

During the Thursday event, Volkswagen Korea also laid out midterm plans for its local business by 2022: The mid-sized premium sedan Passat GT is due release in December, followed by the compact sports utility vehicle T-Roc in early 2021. Volkswagen’s eighth-generation Golf hatchback is rolling out in fall 2021 and a new, large-sized SUV Teramont is due release in 2022.

Hyundai Motor, CICC to cooperate on commercial vehicles in China