There’s a new Mexican food joint in Seoul that we need to taco ‘bout.

Having opened just two months ago, Taqueria Stan is located at an intersection on a backstreet in Seoul's old industrial district, with a trophy engraver and calendar maker as its neighbors.

“Sometimes the locals stop by but they don’t come back,” laughs co-owner and chef Yoo Tae-hwa.

Maybe they prefer the classic sundae, a type of blood sausage, often served with a plate of naejang, which usually consists of liver, intestines and ear, offered at a nearby Korean restaurant, but Taqueria Stan’s iterations of similar cuts of pork need to be tasted to be believed.

The menu is simple. Two types of taco, pork shoulder and chorizo, are mainstays, while specials such as carnitas as well as chicken and pineapple are offered from time to time. 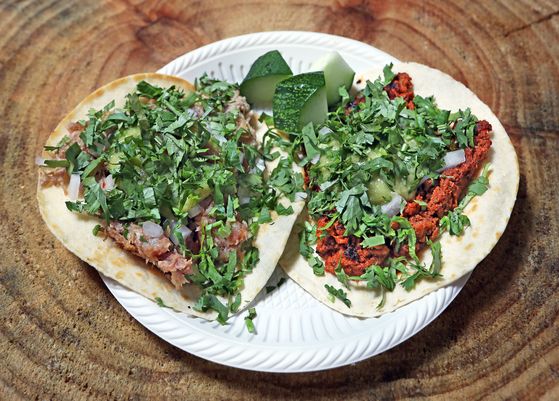 
In the same varieties are quesadillas as well as chicken taquitos and ‘dirty fries’ — golden french fries topped with chorizo, sour cream, salsa verde, chipotle mayo and cilantro — which round out the menu. Nothing costs more than 7,000 won ($5.80).

“When we think about tortillas people say it should be corn, but I think that’s not true. The northern part of Mexico uses flour tortillas because it’s not the right environment for growing corn, so they use flour instead of corn, and now it’s kind of trendy in the United States. So that’s why we chose to use flour tortillas — because they’re trendy and delicious,” Yoo said.

Yoo first discovered his love for tacos when he took a break from studying to become a chef in the United States to visit Mexico and Peru.

When he returned to Korea he began working in the kitchen of Stan Seoul, where he met the other two co-owners of Taqueria Stan, Han Young-hun and Lee Jae-joon. 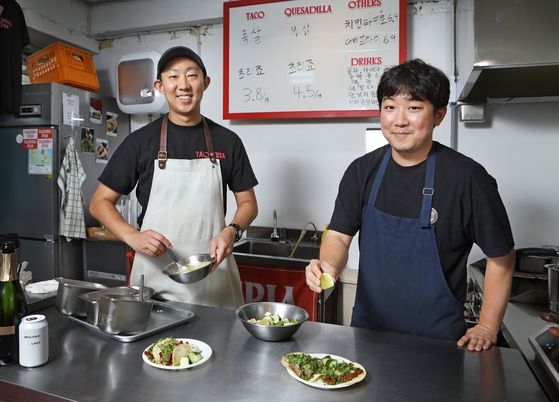 
Stan Seoul, located in southern Seoul’s upmarket Gangnam neighborhood, serves beer and small plates, and it was here one night, while scarfing down a plate of tacos at the end of a busy day, that the trio decided to open a taco joint.

After embarking on a three-week “business trip” — perhaps not a strict business necessity, but certainly an enjoyable one, Yoo implies — to Mexico City and Los Angeles for research purposes, the three set about finding the perfect spot to open Taqueria Stan.

Euljiro couldn’t be more different from Gangnam, but the industrial area famed for its tile, lighting, metalwork and printing stores has seen somewhat of a transformation in recent years with trendy restaurants and speakeasies opening down the narrow, winding backstreets.

That was the main reason Tae, Han and Lee chose the area for their newest venture and, after almost five months of searching, happened upon the space one day while looking for somewhere to park. Tae said they knew it was the perfect spot the moment they saw it. 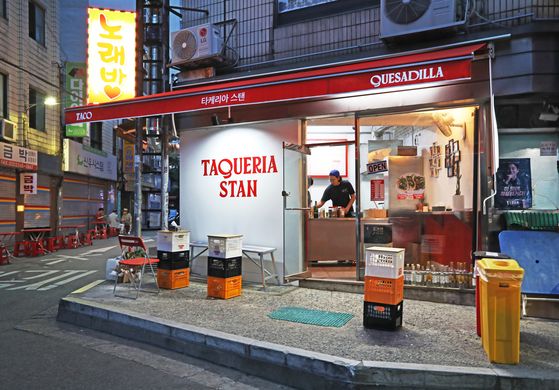 
Patrons may be surprised when they see the tiny kitchen, and even more so when they taste the food that comes out of it, but Tae says working in such a small space has many advantages, like being able to keep a closer eye on quality control and talking freely with customers.

There is no dishwasher, because there are no dishes. Or forks, or knives or spoons for that matter.

The food is served on biodegradable plates made from corn starch and is made to be eaten with your hands. (There are utensils behind the counter if you really need them).

Did we mention there aren’t any tables either?

Crates, which also function as storage, are piled high in front of the restaurant and serve as makeshift tables for customers to stand at. There is a bench and many choose to sit on the high curb while they devour their meals.

It’s all part of the “no fuss dining experience,” Tae said. “And to be honest, we didn’t have that much money to spend.”

“For me, tacos are a grab and go food — just come by casually and eat in minutes,” he added.

Yoo mentioned plans to add plastic tables and chairs on the streets after traffic dies down after 6 p.m., which would offer the perfect way to enjoy a taco or three on a warm summer evening with a cold beer. If beer's not your tipple of choice, Korean options like craft soju and makgeolli are available, as well as a more traditional tequila.

The team also hopes to continue collaborating with other brands in the future, having already worked with Lost & Found, a bourbon bar that offers brunch on Sundays, and taphouse Seoul Gypsy.

And their biggest hope for the future? Building the Stan brand.

Taqueira Stan's address and opening hours can be found on their Instagram, @taqueria.stan