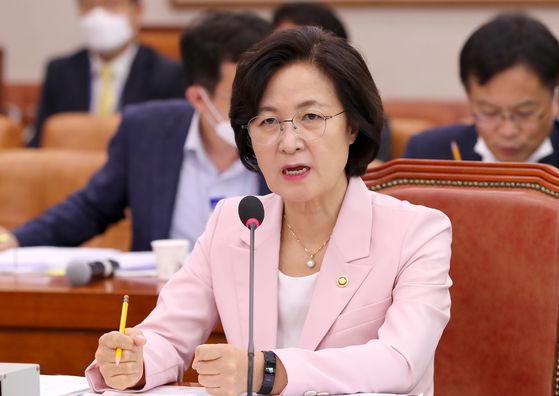 Justice Minister Choo Mi-ae on Wednesday speaks at the Legislation and Judiciary Committee of the National Assembly. [YONHAP]


IIn a rare intervention into the criminal justice system, Justice Minister Choo Mi-ae ordered Prosecutor General Yoon Seok-youl to shut down a review of the validity of an ongoing investigation into a senior prosecutor. 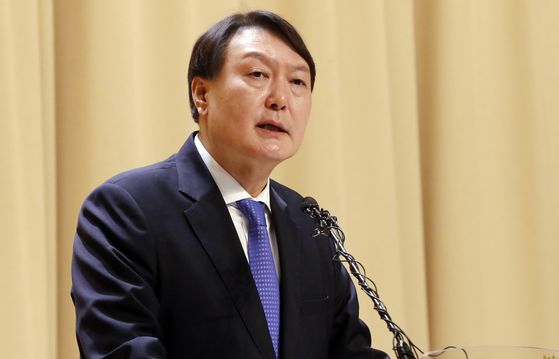 
The Ministry of Justice Thursday said Choo made an official order to Yoon about the Seoul Central District Prosecutors’ Office’s probe into alleged collusion between Han Dong-hoon, a senior prosecutor and a close ally of Yoon, and Lee Dong-jae, a reporter from Channel A.

Over the past weeks, the district prosecutors have been looking into the suspicion that Han and Lee colluded to blackmail a businessman for incriminating information on Rhyu Si-min, a liberal pundit with close ties to the Moon Jae-in administration. 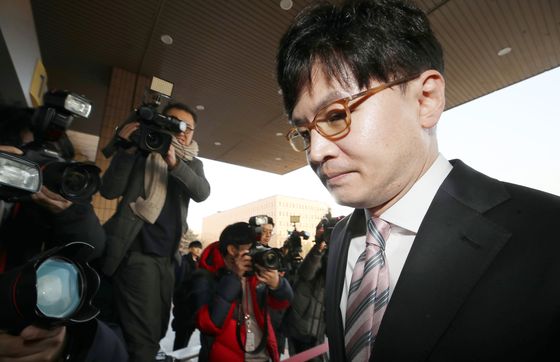 In this file photo, Han Dong-hoon enters the Justice Ministry on Jan. 10, 2020, after he was appointed as the deputy head of Busan High Prosecutors' Office. [YONHAP]

Earlier this week, the Seoul district prosecution demanded more independence in its probe since one of the suspects is Han, an ally of Yoon, their boss. Yoon’s Supreme Prosecutors’ Office rejected the demand.

But it granted Lee’s request that an advisory panel of legal experts be allowed to review the validity of the probe. The review was to take place today.

“Justice Minister Choo thinks it is premature for the advisory panel to make a conclusion in the middle of the probe,” the Justice Ministry said. “She, therefore, ordered the prosecutor general to stop the review process.”

According to the ministry, Choo also granted more independence to the Seoul Central District Prosecutors’ Office, as it requested.

“Choo ordered that the investigation team will be exempted from supervision by its superior authorities including the Supreme Prosecutors’ Office,” the ministry said. “The team will report the final outcome of the probe only to the prosecutor general.”

After the conflict between the Seoul Central District Prosecutors’ Office, headed by a Choo ally, Lee Sung-yoon, and Yoon’s Supreme Prosecutors’ Office was made public, Choo said Wednesday that she was forced to make a “bold decision.”

This is only the second case in which the justice minister has exercised his or her legal right to intervene in a case before prosecutors.

Although the justice minister has legal authority to direct and supervise the prosecutor general in a specific investigation, that authority was only once used in the past, allowing the prosecution to maintain independence.

The Supreme Prosecutors’ Office said Thursday evening it will ask heads of district offices nationwide whether Yoon should accept Choo’s order or not.

Chief prosecutors of district offices from around the country will meet Friday, but the time and venue were not announced.

For the time being, the Supreme Prosecutors’ Office decided to not hold an advisory panel meeting scheduled for Friday.

“It doesn’t mean that we are accepting Choo’s order,” a prosecution official said. “We will decide after listening to the top prosecutors’ opinions.”

There is only one precedent for such a situation.

In 2005, Justice Minister Chun Jung-bae ordered prosecutors not to attempt to detain Kang Jeong-koo, a sociology professor at Dongguk University, for an investigation into his alleged National Security Act violations.

After Chun made the order, prosecutor general Kim Jong-bin accepted it, but stepped down from the post only six months into his two-year term.

At the time, Kim said the prosecution’s political neutrality was violated by Chun’s order.

Choo’s move on Thursday fueled speculation that the administration was pressuring Yoon to step down.

Ever since she took office in January, Choo has been at war with Yoon, whom Moon appointed to head the prosecution in July 2019. His two-year tenure is guaranteed by the law.

Ruling Democratic Party (DP) lawmakers are also pressuring Yoon to resign. Rep. Yun Ho-jung, chairman of the Legislation and Judiciary Committee, said in an interview with MBC Radio on Thursday that Yoon must make a “brave decision” for the sake of the prosecution. 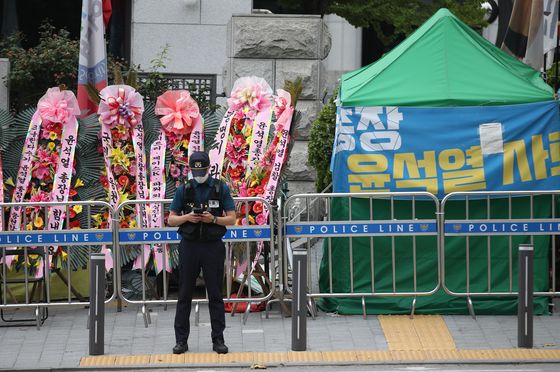 In front of the Supreme Prosecutors' Office building in Seocho-dong, Gangnam District of Seoul, flowers sent by the people to express their supports for Prosecutor General Yoon Seok-youl stand next to a protesters' tent demanding Yoon's resignation on June 29, 2020. [YONHAP]


Last week, Choo used her power to demote Han Dong-hoon, deputy head of the Busan High Prosecutors’ Office, and assign him as a researcher at the Institute of Justice.

She also ordered the ministry to conduct a separate internal investigation into him.

It was Han’s second demotion in less than a year.