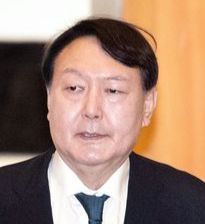 The Supreme Prosecutors’ Office said Yoon ordered an independent team to investigate suspected collusion between a reporter and Han Dong-hoon, a senior prosecutor who is a close ally of Yoon himself.

It said Yoon made the decision to respect Choo’s order as well as opinions inside and outside the prosecution.

Han is under investigation by the Seoul Central District Prosecutors’ Office for allegedly colluding with Lee Dong-jae, a reporter from Channel A, to blackmail a businessman for incriminating information on Rhyu Si-min, a liberal pundit with close ties to the Moon administration.

According to the prosecution, Yoon ordered that an independent investigation team be formed. The district prosecutors currently investigating the case were ordered to join the team.

Yoon will not supervise the probe. He will only be briefed by the team about its final conclusion.

Yoon’s decision followed Choo’s order to give greater independence to prosecutors investigating the case. Choo made a rare intervention in the criminal justice system on July 2, ordering Yoon to shut down a review of the validity of the probe.

Choo told the Seoul Central District Prosecutors’ Office to continue investigating Han and not worry about the prosecutor general. Last month, the district office asked Yoon for more independence in its probe of Han, but Yoon rejected the request.

On Friday, Yoon summoned senior prosecutors from district and high public prosecutors’ offices across the country to deliberate on Choo’s order and decide whether it represented an overreach of her authority over the prosecutor general, whose independence is technically guaranteed under the law.

Although Yoon’s Supreme Prosecutors’ Office did stop the investigation validity review, Yoon waited until Wednesday evening to tell Choo whether he would accept her order to grant more independence to the Seoul district prosecutors to pursue the probe.

Earlier Wednesday morning, Choo issued an ultimatum to Yoon, giving him until the next morning to obey her order to give greater independence to prosecutors investigating his associate.

“We must stop going down the wrong road,” Choo wrote in a Facebook message on Wednesday. “I will wait until 10 a.m. on Thursday.