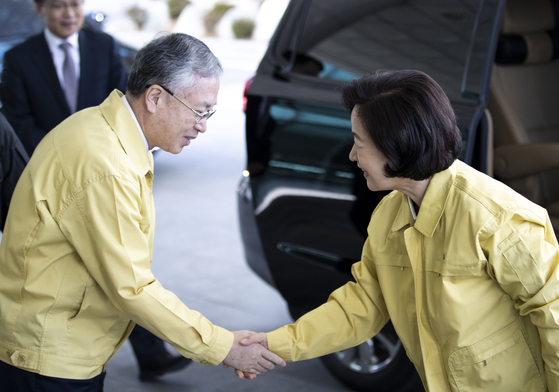 
A major reshuffle of senior members of the prosecution is expected in the coming weeks, after two top prosecutors submitted resignations to create vacancies for Justice Minister Choo Mi-ae to fill.

Both Kim and Yang started their law careers earlier than did Prosecutor General Yoon Seok-youl. They entered the Judicial Research and Training Institute, a state-run training facility of aspiring lawyers, judges and prosecutors, in 1991, one year before Yoon.

“It is true that Kim and Yang recently submitted resignations,” the ministry official said. 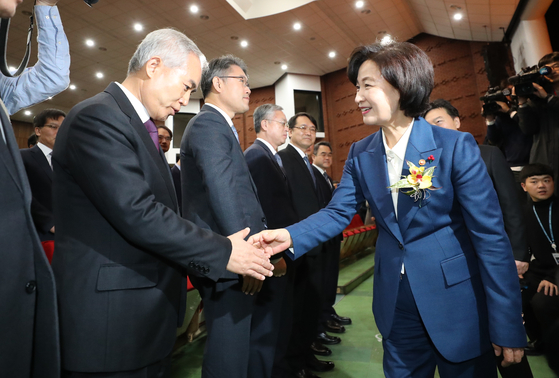 Sources told the JoongAng Ilbo that the Ministry of Justice had asked the two senior prosecutors if they intended to step down. They didn't respond immediately, the sources said.

Kim appeared to be a trusted ally of Yoon. During the latest power struggle between Choo and Yoon over a probe into Han Dong-hoon, Yoon proposed creating an independent investigation team that would be supervised by Kim.

Choo, however, struck down the plan and used her power to give broader independence to the Seoul Central District Prosecutors’ Office, headed by her ally Lee Sung-yoon, to investigate Han.

Han, a senior prosecutor and key ally of Yoon, has been accused of working with a reporter in an attempt to extort a convict to obtain incriminating information on Rhyu Si-min, a liberal pundit with close ties to the Moon Jae-in administration. Han was questioned by the Seoul Central District Prosecutors’ Office on Wednesday.

With Kim and Yang stepping down, there will be a total of eight vacancies in the prosecution leadership. In the upcoming reshuffle, Choo is expected to first fill the eight posts — which include the Seoul Eastern District Prosecutors’ Office and the deputy heads of high prosecutors' offices in Daejeon, Daegu, Gwangju and Busan — before moving on to mid-level prosecutors.

Sources said the reshuffle will likely take place before the end of July. “The Justice Ministry has not asked for the Supreme Prosecutors’ Office’s cooperation,” a prosecution source said. “But the performance evaluation is probably ongoing at the ministry now.”


Choo is expected to use the upcoming reshuffle to further weaken Yoon’s power and isolate him in the prosecution.

Yoon started his two-year tenure as the prosecutor general on July 25, 2019. His relationship with the administration rapidly deteriorated after the prosecution started investigating a series of abuse of power and corruption allegations against key associates of the president.

As soon as she took office in January, Choo carried out two major reshuffles to reassign prosecutors who were investigating the politically sensitive cases and effectively demoted Yoon’s closest aides.

Although the justice minister has customarily consulted with the prosecutor general about the reshuffles, no discussion took place between Choo and Yoon. All senior prosecutors in Yoon’s Supreme Prosecutors’ Office were changed as of the first half of 2020.

Among the senior prosecutors reassigned in January was Han. Han was the lead prosecutor in the investigations into academic and financial transgressions allegedly committed by former Justice Minister Cho Kuk and his family.

The reshuffles effectively dismantled Yoon’s team, although each individual played key roles in bringing Moon to power. They investigated and indicted former President Park Geun-hye and her associates for corruption and abuse of power.

Prosecutors who had maintained amicable ties with the current administration or the administration of Roh Moo-hyun, Moon's political mentor, were moved into powerful posts.

During the Roh administration, Lee was dispatched to the Blue House to serve as a special inspection team leader from 2004 to 2006 and worked with Moon, who was then senior presidential secretary for civil affairs.

It is possible that Lee may be promoted in the upcoming reshuffle and that the vacancy will be filled by another ally of the administration.

A senior prosecutor said Yoon will not budge.

“No matter how the reshuffle unfolds, the prosecutor general won’t step down,” he said.