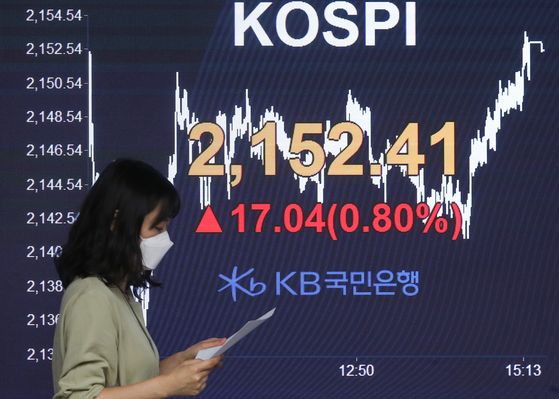 The final Kospi figure is displayed on a screen in a dealing room at KB Kookmin Bank, located in the financial district of Yeouido, western Seoul, Friday. [YONHAP]


Stocks closed higher Friday on hopes of economic recovery buoyed by better-than-anticipated economic indicators from major economies, including the United States. The won rose against the dollar.

The gains were led by hopes for an economic rebound, fueled by positive leads from the world's two largest economies, analysts said.

The Nasdaq Composite gained 0.52 percent to close at a fresh record high of 10,207.63 on Friday, following reports that the U.S. jobless rate in June fell to 11.1 percent from 13.3 percent the previous month.

The rising number of new Covid-19 infections, however, remained a risk.

"The steep increase in new Covid-19 infections is also driving some investors into a wait-and-see mode," Choi said.

Samsung BioLogics dipped 1.91 percent to 771,000 won, while SK Biopharmaceuticals spiked 29.92 percent on its second day on the main bourse.