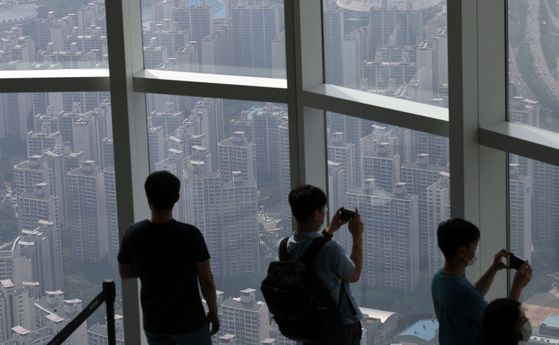 Visitors to Lotte World Tower in Songpa District, southern Seoul, look out at the view of apartment buildings. Songpa District is subject to tighter regulations that are likely to pass during the 21st National Assembly. [YONHAP]


Ruling party floor leader Kim Tae-nyeon said Friday during a meeting with top lawmakers that an amendment on the comprehensive real estate tax will be voted on this month.

Seoul's overheated housing market has led to criticism that despite the designation of additional areas subject to tighter regulations, the measures have failed in curbing rising home prices in the capital. Gangnam and Songpa districts, both in southern Seoul, were designated as overheated areas under the new real estate regulations on June 17, when the last set of government real estate regulations were introduced.

According to the Korea Appraisal Board, an institution under the Land Ministry for the management of the real estate market, Seoul’s apartment prices went up by 0.06 percent in the last week of June, the same rate of increase as the week prior. The ministry’s transaction data information system shows that a 59-square-meter (635-square-foot) unit in the Raemian Daechi Palace apartment complex in Gangnam District's Daechi-dong sold for 2.5 billion won ($2.1 million).

Meanwhile, the price of jeonse, or long-term housing rental deposits, is rapidly rising in Gangnam District. This is due to restrictions on gap investment — purchasing homes with jeonse deposits nearly equal to the market prices of the units and selling them when values rise — amid the continued high demand for properties in Gangnam.

The amendment on the comprehensive real estate tax law is likely to be a priority for the 21st National Assembly. According to the revised bill, the property tax levied on real estate valued over 900 million won will also be applied to single-home owners. Single-home owners and those that own two houses in non-speculative regions will face an increase between 0.1 to 0.3 percentage points in the property tax rate, and for those that own more than three houses, the rate will be from 0.2 to 0.8 percentage points higher.

The government will also likely raise the rate of application of the market price to posted real estate prices, essentially meaning the amount of property that surpasses 900 million won in value is projected to increase.

Laws controlling the increase in jeonse deposits will also be expedited. The government is planning to introduce report systems for jeonse and monthly rent, a ceiling on the rate of rent increase and a system that grants tenants the right to request contract renewals for two years.

The June 17 real estate policy has been criticized because it has a component that blocks mortgages on houses. In response, Moon ordered a measure that expands the special supply of homes, and the Land Ministry is examining an increase in the supply ratio for joint ownership from the current 20 percent.

But experts are concerned about over regulation.

“When restrictions are placed […] on jeonse deposits, side effects like increases in initial rental fees can occur,” said Lim Jae-man, a professor of real estate finance at Sejong University Graduate School of Industry.

“The government has been biased toward placing restrictions on the housing market, leading the market to overly shrink. Right now, demand is increasing in this already narrow market,” said Lee Hyun-suk, a professor at Konkuk University's department of real estate studies.


“The housing price may fall for the time being, but once these restrictive policies continue, the private rental market will shrink even more, further destabilizing the housing conditions for the public,” Lee said.

The right way to revamp the rich tax (KOR)