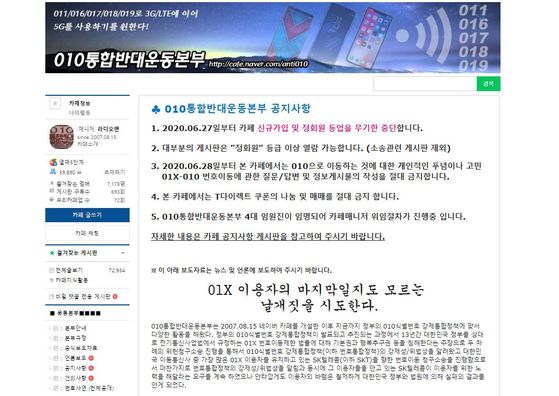 The sun is setting on the early age of modern telecommunications, and some Luddites are having none of it. They have formed an activist group and want to take their case all the way to the Supreme Court.

Due to a quirk of regulation, all 011-prefixed numbers will have to be surrendered by next June. This means that numbers running as far back as 1996 could disappear.

Before all mobile phone prefixes in the country were unified to 010, Koreans had 011, 016 and 019 prefixes, depending on their mobile carrier. The trendiest was SK Telecom’s 011, backed by a branding strategy that emphasized the premium image.

SK Telecom will shutter its 2G service from July 6 until July 27, with Seoul being the last region to offer connections. This also marks the end of the 011 prefix, which is only offered to SK Telecom subscribers still on the old 2G network. Regulators say that all phones 3G and above must use the 010 prefix and stay in line with a transition that began in 2004.

SK Telecom’s move follows a decision made last month by the Ministry of Science and ICT that approved the company’s request to halt 2G services before the ministry’s suggested due date of June 2021. For the mobile carrier, maintaining 2G connections required maintenance and funds that could otherwise go toward new technologies.

“After four field inspections of 2G network base stations nationwide, we found the 25-year-old equipment was causing frequent breaks, and some components were impossible to repair due to a lack of parts,” the science ministry acknowledged in a June statement. “Considering the difficulty of repair and the low connection quality, operating 2G networks seems no longer appropriate for the user’s sake.”

On June 24, the Seoul High Court ruled in favor of SK Telecom in a civil suit filed by 633 users of SK Telecom's 01X prefix. The group claimed that the forced number change violates basic individual rights. However, their pushback still led to SK Telecom's second victory when the court ruled that mobile phone numbers are an asset of the country, not the individual — further acknowledging that SK Telecom's halting of 01X services would be the result of its adherence to a policy change.

To console 011 subscribers, the mobile carrier said it will offer a service that will enable them to make and receive calls on the 3G network using their old numbers until June 2021, under the condition that they agree to adopt a 011 prefix once that deadline arrives.

An activist group — the 010 Consolidation Movement Opposition Headquarters — announced Friday that this was “their last shot” to keep their old phone numbers. In the past two decades, they’ve steadfastly refused to adopt the 010 prefix for business-related or personal reasons — even if it meant being unable to upgrade to a smartphone. Contrary to the Seoul High Court’s ruling, their claim is that the decades-old 01X phone number is practically a personal asset.

The plan is to submit an appeal to the Supreme Court regarding the June 24 ruling within two weeks and request a provisional injunction to stop SK Telecom from axing the 011 prefix. The group will also file a constitutional appeal on the 010 prefix consolidation policy itself.

“Since 2012, when 2G-supporting devices stopped being released in the country, we’ve been sourcing used handsets or modified foreign devices to work on domestic networks solely based on our own efforts. We lived facing discrimination when it comes to the choice of new devices or subscription plans,” the activist group said in a Friday statement.

“Through our last efforts, we want to make a point to prove how wrong the prefix consolidation policy and its execution is."