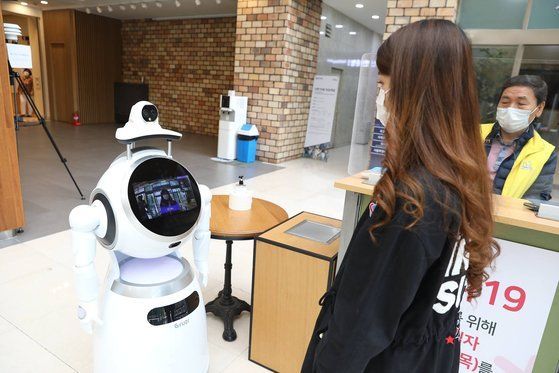 Woody takes a student's temperatures and checks if she is wearing her mask properly. Seocho District, southern Seoul, is planning to install infrared cameras and robots with built-in facial recognition functions at 51 schools by the end of July. [SEOCHO DISTRICT OFFICE]


When a student at Wooam Elementary School in Seocho District, southern Seoul, enters the school with his mask only covering his mouth and not his nose, a robot named Woody steps in.

Woody is an artificial intelligence (AI) robot designed to reinforce preventative efforts to combat the coronavirus outbreak. The robot stands at about 1.2 meters (3.9 feet) tall and is responsible for checking temperatures and policing mask-wearing when students enter the school every morning.

Woody is the latest in a long line of "untact" — a portmanteau of the prefix “un” and contact, meaning “no contact" — technology developed as Korea ramps up protection measures and prepares for the post-coronavirus era.

Seocho District has deployed AI robots with built-in infrared cameras and face detection functions at 51 schools. When students stand in front of Woody, their temperatures show up on the screen. The robot is also capable of discerning whether students are not wearing masks properly.


The students are fans of Woody, as they no longer have to wait to get their temperatures taken.

“It’s convenient because the robot can check my temperature right away, and I don’t need to wait,” said a student from Youngdong Middle School.

It takes about 0.5 seconds for the robot to complete a temperature check.

The built-in camera on the AI robot can also make up for the flaws of thermal imaging cameras viewed by human operators, which carry privacy risks as they capture a view of the entire body.

“Robots obtain temperature data from the face, and hence do not have the privacy problems that emerge from thermal imaging cameras,” said a Seocho District official. “As untact technology becomes the new norm in the post-coronavirus era, these AI robots will prevent cross-contamination and cut down the need for human resources.” 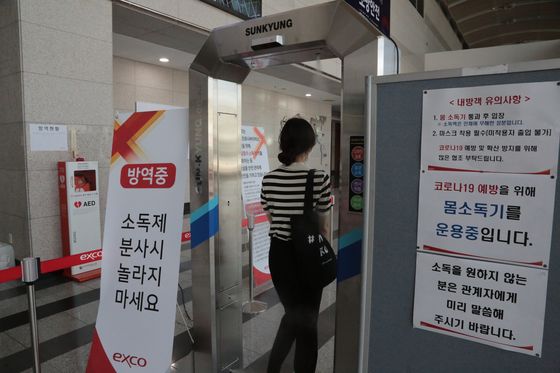 A visitor to EXCO, an exhibition convention center in Daegu, walks through an air curtain machine, which dispenses small particles of liquid sanitizer. [EXCO]


An increasing number of local governments have started to integrate untact disinfection methods into their ordinary quarantine routines, also in preparation for the post-coronavirus era.

Yeongdeungpo District in western Seoul has installed so-called air showers at Seoul Mullae Elementary School, Yeongdeungpo Senior Care Center and a nursing hospital. The air showers resemble body scanners at airport security checkpoints, disinfecting those walking through them. When somebody stands between the pillars of the machine, the machine detects their motion, absorbs any ultrafine dust particles on the body and removes all viruses as well, according to the district.

“A recent survey on the satisfaction rate of the air showers showed that users are mostly satisfied with the device,” said a Yeongdeungpo official. 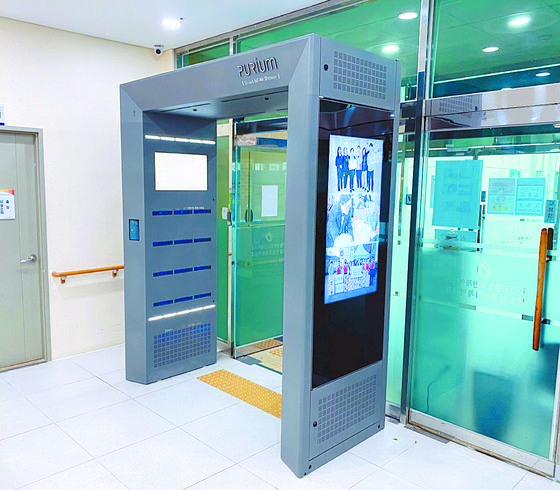 Andong in North Gyeongsang, home to the Hahoe Folk Village, established untact disinfection gates at its main sightseeing spots in May. Daegu EXCO, an exhibition convention center in Daegu, placed air curtains at its entrance, which disseminate liquid sanitizer in small particles when people pass through.

Incheon International Airport has started a trial run of an untact temperature check service at Terminal 1 and at a departure gate on the third floor of Terminal 2.

Some local governments are applying the untact method in other areas. Gyeonggi is exploring a system that lets people pay their bus fare without actually touching the card readers.

“The untact culture is bound to continue as a way of life even after the coronavirus crisis,” said Ryu In-kwon, chief of policy planning and budget bureau at the Gyeonggi provincial government. “We will continue to establish the untact culture in Gyeonggi.”