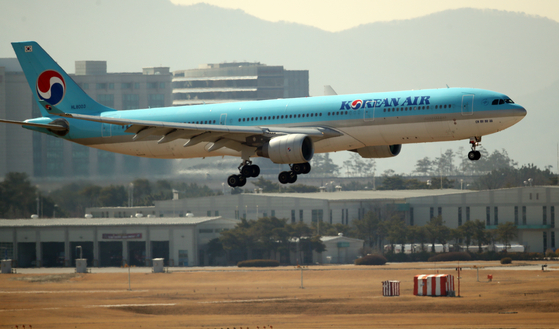 Airlines are worried that the cost of importing aircraft parts will rise starting next year, an added cost they don't need as they recover from the Covid-19 disaster.

The Ministry of Economy and Finance Thursday said tariff exemptions on aircraft parts will decline 20 percent annually starting next year until they are eliminated completely in 2026.

The Korean government's grounds for eliminating the tariffs exemption on aircraft parts is due to the free trade agreements that Korea has with major countries such as Singapore and the U.S. since 2013.

Because the bilateral trade agreements lifts tariff, there is no reason for the Korean government to provide tariff exemptions on imported aircraft parts.

However, local airlines complain that it's not easy to get tariff-free imports of parts under the free trade agreement because they have to prove that the imported parts came from the country with the FTA with Korea.

If parts don’t originate from a country with a bilateral FTA with Korea, the tariffs stand.

Airlines argue it’s not easy for them to prove where imported parts originate from since aircraft manufactures like Boeing and Airbus are not helpful in authenticating the origins.

“The process of certifying the origin [of the parts] is complicated and costly,” said an official in the local aviation industry. “Since the manufacturers have more power over [the customers], they aren’t willing.”

The local aviation industry expects their tariff costs to skyrocket when the exemptions are eliminated.

The industry estimates that when including much smaller budget airlines, tariff exemptions amount to around 200 billion won.

If the exemptions are stripped away, the extra costs will be a devastating blow to smaller airlines.

Last year, Jeju Air and Jin Air, the budget airline of Korean Air, suffered their biggest losses since they were founded.

Korean Air was able to report a 238.3 billion won operating profit last year, largely thanks to increases in its international cargo business, although passenger traffic was decimated by the pandemic that grounded nearly all international flights.

Even with the vaccine rollout, the future is cloudy. The International Air Transport Association (IATA) projected global passenger flights this year will barely be half of what they were in 2019.

The TCA is a multilateral agreement in which 32 countries including the U.S. and EU agreed to eliminate tariffs on civil aircraft, engines and related parts and components on a nondiscriminatory basis to other signatories.

This would allow local airlines to get tariff exemptions without having to get proof of origin for parts.

However, Seoul is not too keen on the idea.
If it joins the TCA, the Korean government will be prohibited from providing support to local aircraft manufacturers. The WTO agreement prohibits any government subsidy for research and development as well as production.

“If domestic aircraft manufacturers, which are still in their early stages of development, are deprived of government support, it will be difficult for them to grow,” said an official in the local aircraft manufacturing industry. “Airlines are struggling from Covid-19,” the official added, “but if they sign the TCA, the costs will be bigger [for the country] then the benefits.”

Lee Si-hyeong, a spokesperson for Korea Civil Aviation Association, said the government needs to act more aggressively in solving the crises that the aviation industry is facing.