The coronavirus outbreak is changing the way corporate leaders communicate with their employees.

The CEOs of major Korean companies have started appearing on live-streamed videos as an alternative means to effectively communicate with their employees when “untact” — a portmanteau of the prefix “un” and contact, meaning “no contact”— is becoming the established norm due to the coronavirus pandemic.

The way companies communicate with their employees has been changing rapidly as people in their 20s and 30s are becoming key members of companies. 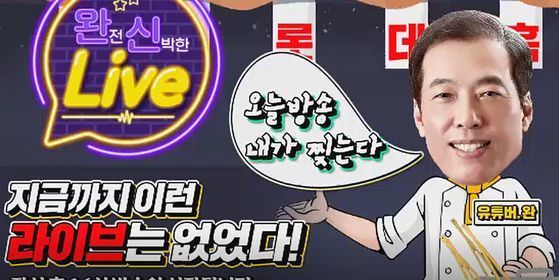 
Lee Wan-shin, CEO of Lotte Homeshopping, appeared on the company’s YouTube channel on June 24. According to the company, about 600 employees simultaneously accessed YouTube to watch the video, which ran live for an hour.

While Lee was looking for a way to communicate with his employees in an untact way, he came up with the idea of appearing in the company’s YouTube channel. During the live broadcast, Lee shared jokes and even danced for the employees.

When an employee said to Lee that his wrinkles are barely noticeable, Lee replied, “It is all because of makeup.”

Sharing jokes was not the all Lee did.

He disclosed details about the company’s sales figures, as well as its business strategies. He even offered anecdotes from the time he was new to the company, to give advice and encourage employees who were watching the videos.

“I was surprised by Lee’s appearance on YouTube, which many young people in their 20s enjoy watching,” Lee Ye-rim, an employee of Lotte Homeshopping said. “I hesitated [to talk to him] at first, but was able to ask questions and present my opinions freely through the chatting system after I saw him trying hard to communicate with us comfortably.”

“It is meaningful in that many employees enjoyed [my appearance on YouTube] during the heavy atmosphere amid the coronavirus pandemic,” Lee said. “I will keep trying to find a good way to strengthen communication with them.”

It is very unconventional for CEOs, who are mostly in their 60s, to appear on a youth-dominated medium. Communicating in untact ways became essential when most offline gatherings are being canceled and more employees started working from home. 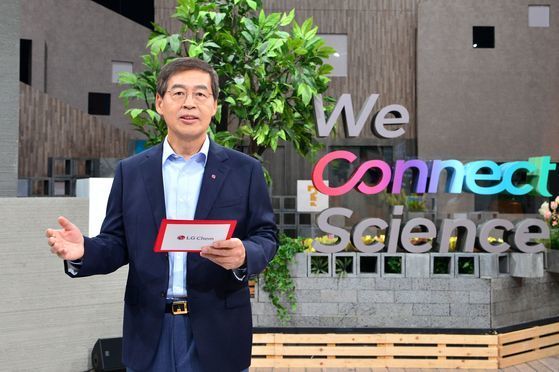 Shin Hak-cheol, CEO of LG Chem, talks about the company's new corporate vision during an online ceremony in a studio in Ilsan, Gyeonggi, on May. [LG CHEM]


LG Chem CEO Shin Hak-cheol has been having online meetings with his employees for three consecutive months. Shin talked to nearly 200 employees at the company's domestic plants in Yeosu, South Jeolla, and Gimcheon, North Gyeongsang, and at overseas branches in the United States, Poland and China. He talks to them at least three times a month.

LG Chem calls the meeting “Speak-up,” with the aim of hearing thoughts and opinions from employees.

An employee from LG Chem last year suggested that “reverse mentoring, a mentoring program where young employees mentor older employees, is necessary in order for senior executives to understand employees’ cultures and communicate with them more effectively.”

The company accepted the idea and has been running the system since last year.

“Many companies were keen to evolve communications even before the coronavirus,” Park Jun, an employee in the industrial research division of Korea Chamber of Commerce and Industry, said. “As the coronavirus outbreak accelerates changes, the untact way of communication will be an inevitable culture and trend.”

Last year, SK Innovation CEO Kim Jun and six heads of its energy affiliates appeared on the company’s YouTube channel to promote the company's global environment campaign “I Green, We Green.” The campaign, led by SK Innovation, is to reduce the consumption of single-use, disposable products in company. The video was totally different, with promotional clips that the company had been releasing, which was a big surprise to employees.

“Bosses must be more friendly to employees in order to achieve effective communication with them,” an employee from SK Innovation said. “To make [the ‘familiar’ atmosphere], change in bosses’ authoritarian attitudes is essential.”

As fun and friendly video clips are being considered as more effective communication tools than formal meetings, conferences or reports, more CEOs are expected to choose it as a means to communicate with their employees.

“Millennials do not consider leaders as ‘admirable’ or ‘deserved to be respected’ just because they are men of great dignity,” Kim Beom-soo, professor of Yonsei University’s Graduate School of Information, said. “They are rather better motivated when the leaders are very humane, and when they feel a sense of affinity with their leaders.”

“Fun videos don’t always work. However, it is an inevitable trend that companies are changing their communication protocols accepting values of diversity based on the digital.”

LG Chem teaming up with Unist on technologies