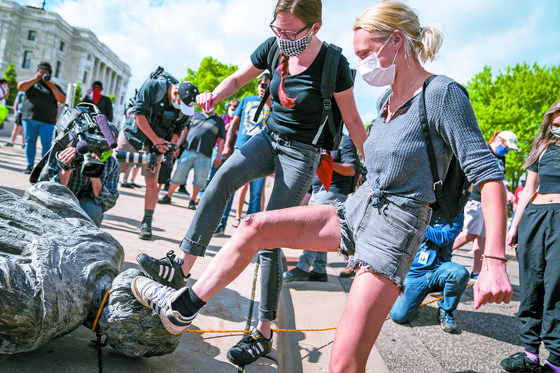 Americans stomp on a Christopher Columbus statue after it was toppled in front of the Minnesota State Capitol in St. Paul, June 10. [AP/YONHAP]

Statues are undergoing new scrutiny. After the death of George Floyd in May, many statues have been removed in the United States. Protestors removed the statue of Confederate General Albert Pike in Washington on June 19. It was the 155th anniversary of Juneteenth, a holiday celebrating the end of slavery in the United States.

Presidential statues are no exceptions. The statue of 26th President Theodore Roosevelt in front of the Natural History Museum in New York is to be removed. Erected in 1940, the statute depicts the president on a horse with a Native American and an African American on each side.

“The world does not need statues, or relics of another age, that reflect neither the values of the person they intend to honor nor the values of equality and justice,” Theodore Roosevelt IV, the great grandson of the president, told the media. “It is time to move the statue and move forward.”

In a speech in 1854 in Illinois, Lincoln said, “My ancient faith teaches me that ‘all men are created equal;’ and that there can be no moral right in connection with one man’s making a slave of another.”

But in a debate during his 1858 Senate campaign, he had said, “There is a physical difference between the white and black races which I believe will forever forbid the two races from living together on terms of social and political equality.”

Some have also argued that the sculpture of the carved faces of four U.S. presidents on Mt. Rushmore in Keystone, South Dakota, should be removed.

Korea is no exception. The statues of former presidents Chun Doo Hwan and Roe Tae-woo in Cheongnamdae, an old presidential resort, are to be removed.

Reviewing history has been likened to the difficult task of carving solid ice, and many statues are shivering.